The decision by managers of Ghana’s economy to issue both dollar and cedi denominated bonds has been commended by the Chief Investment Strategist at Standard Chartered Bank. According to Steve Brice, the decision by the Bank of Ghana which is mainly to deal with maturing debts, would provide the needed liquidity to shore up the local currency – the cedi – and at the same time re-structure the country’s huge external debt. “Ghana has significant external debt and it is trying to re-profile that debt to make sure it is sustainable. So that is what they are doing with the dollar bond by trying to extend the maturities significantly. They want to make sure it does not have big humps in maturities because that is where they get liquidity stress for the country and that can also create some challenges”, he posited. He explained that based on the above, Ghana’s efforts to strengthen its fiscal position in order to rely less on external debt, would bear some fruits. Brice said, although much progress had been made in that regard, more needed to be done. Government’s novel US Dollar denominated bond, issued last week, raised $95m; $45m more than the expected yield by the finance ministry. This was the first time the government sought to raise capital through the domestic market. Some economic analysts in the country have criticized the move, saying it could negatively impact the economy. Contrary to these views, Brice assuaged these concerns with the explanation that the nature of Ghana’s economy would make it impossible for that to happen. “If you issue dollar bonds and that money comes from on-shore, then you are draining liquidity at the local system and that could bring pressure on the local interest rate structure. “We have seen that with a lot of oil exporters recently, but I know Ghana is a net oil importer. So I don’t think it will negatively impact on the economy…I think it is good”, he explained. On investment, Brice cautioned investors to adopt a “balanced style approach to investment” to reduce risks in the face of uncertainties in the global economy. He said although “three years ago, we preferred equities and if people just invest in equities they pretty well” the situation is not the same today. Source: Ghana/starrfmonline.com/103.5FM/Tawakalitu Braimah 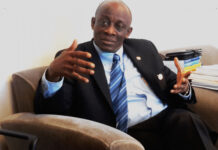