Former Ghana goalkeeper Abubakari Damba has lashed at Black Stars shot-stopper Razak Brimah for abusing his opportunities in the senior national team with his inconsistent performances.

Damba’ s bashing comes at back of the Black Stars two nil lost to the Pharaohs of Egypt on Sunday when he lackadaisically conceded the second goal on the day in the 2018 World Cup qualifier at the El Borg.

Braimah has been the first choice goalkeeper for Coach Avram Grant since his appointment in 2014 despite being a benchwarmer at his club side Cordoba.

“It is very true Razak has been a very lucky goalkeeper because a lot of trust has been shown from the technical team especially Avram Grant. He has not been a true consistent goalie for liking no to say he is not good.

“I want him to improve technically and rule Africa as well as rule the World in the near future. Making mistakes is permissible but repeating mistakes are unpardonable so as professionals evaluation must take place and identify your challenges and work on them”, he told Starr Sports. 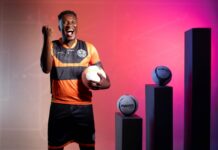