Andy Murray and Mo Farah have been awarded knighthoods in the New Year Honours after enjoying further incredible success in 2016.

Farah and Murray are joined in being knighted by Paralympics equestrian great Lee Pearson, while Jessica Ennis-Hill and Katherine Grainger have been made dames.

Murray ended a sensational 12 months on top of the tennis world after claiming his second Wimbledon title over the summer.

He also successfully defended his Olympic Games title in Rio and his victory at the ATP World Tour finals in London last month meant Murray won the last five tournaments he participated in to take home more than £13.3m in prize money.

Farah also played a massive part in Team GB’s success at the Olympics, where he repeated his feat from London 2012 of winning gold in the men’s 5,000m and 10,000m.

The 33-year-old now has four Olympic gold medals to go with five at both the World and European Championships.

Farah said: “I’m so happy to be awarded this incredible honour from the country that has been my home since I moved here at the age of eight.

“Looking back at the boy who arrived here from Somalia, not speaking any English, I could never have imagined where I would be today – it’s a dream come true. I’m so proud to have had the opportunity to race for my country and win gold medals for the British people, who have been my biggest supporters throughout my career.

“My successes have only been possible because of their support and the commitment, sacrifices and love of my amazing family and the team around me now and over the years.” 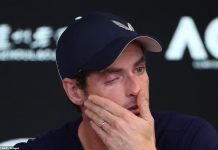 Andy Murray to retire after Wimbledon