President-elect, Nana Akufo Addo has assured Chiefs in the  Western region that he will relocate the  headquarters of Ghana National Petroleum Company (GNPC) to the Western region, as promised during his campaign.

He said he will deliver on his promise of making the Western region the oil and gas hub of the country upon assumption of office.

Addressing chiefs of the region upon a visit Tuesday, Nana Addo expressed his gratitude to them for their support during the electioneering.

“..pledges of one district one factory is going to happen live, modernisation of the Takoradi Harbour is going to be done, Construction of an Accident and Emergency Centre in Takoradi is on plan ..” he said.

He also revealed that modalities for the creation of the proposed Western-North region will be drafted and put to a referendum during the next District Assembly Elections next two years.

On his part, the President of the Western Regional House of Chiefs Ogyeahoho Yaw Gyebi ll who is also the Paramount Chief of Sefwi Anwhiaso commended the President-elect for his victory at the recent polls and tasked him not to forget all the pledges he made to the region. 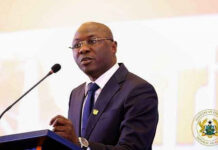