President John Mahama was never heckled or jeered when he visited his hometown Bole in the Northern region to spend Christmas contrary to reports that he was hooted by a mammoth crowd.

The MP-elect for Bole, Alhaji Sulemana Issifu said Mahama was given a rousing welcome and “he even had it difficult making his way through the thick crowd which had gathered to catch a glimpse of him.”

Reports making rounds in a section of the media, especially on Whatsapp platforms allege the outgoing President had a shock of his life when a teeming crowd nearly pounced on him. However, a video made available to Starrfmonline.com shows a huge crowd chanting “We want John” as the security personnel had it tough controlling the ecstatic crowd who were bent on shaking hands with the president.

“The negative reports making rounds never happened. This is pure propaganda. It was rather a teeming crowd who wanted the president to speak to them the night he landed in Bole. It was an emotional moment because they were not prepared to leave, but it was also late in the night and there was no PA system but they insisted they wanted to hear the president.

“These are people who had lined up the streets for well over three hours upon hearing the news that President Mahama was coming to town. So why will the same people boo or heckle him. It is false and I can tell you the President was given a rousing welcome and you can tell from the videos and the pictures all over,” Alhaji Sulemana told Starrfmonline.com.

During Mahama’s visit people could be seen riding on motorbikes including women and children who jubilated deep into the night to be with the president.

“At a point, the First Lady Lordina Mahama asked me ‘are your people aware the president lost the elections?’ This should tell you that we are not going to turn our backs on our own. The love here is deep and Mahama had about 80% votes in the elections. The propaganda on social media won’t wash and I want to state that the people of Bole love Mahama and we’ll never neglect him,” the MP-elect for Bole said.

Mahama spent the Christmas in Bole and took the opportunity to meet with party executives and visited a few friends. He has since returned to Accra with his family. 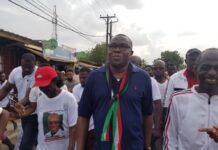