Private television stations will not be given the access and space to mount their cameras during tomorrow’s investiture of President-elect Nana Akufo-Addo at the Black Star Square.

This is because, parliament and State protocol who are in charge of the event have given the exclusive right of coverage to the national broadcaster, Ghana Broadcasting Corporation (GBC).

Starr News has learnt all other television stations who wish to broadcast the event live will be directed  to pick the feed from GTV.

Meanwhile, Starr News’ Wilberforce Asare who visited the Black Star Square where the inauguration will take place reports that all is set for the event which will be graced by some six thousand people, including several heads of state.

Ivorian President,  Alassane Ouattara, will be the special guest of honour.

Nana Akufo-Addo of the New Patriotic Party who contested the presidency for the third time beat incumbent President John Mahama of the NDC in the December 7, 2016 polls. 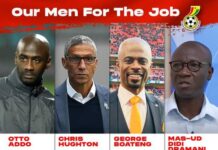