This according to him, was due to the fact that his brand is “bigger than politics.”

Speaking on personality profile show, Starr Chat on Wednesday, the man popularly known as ‘Mr. Music Man’ shied away from disclosing the political party he voted for during the December 7, 2016 polls.

Asked whether his party won by host Bola Ray, he retorted “I think Ghana won and that’s the most important thing.”

Rating the outgoing John Mahama-led NDC government as an entertainer, he said “I think he did well by bringing in the Ministry for the Creative Arts. But my problem with [that] ministry is that the connection between what was really happening wasn’t there.”

He said he is working on a couple of new tracks and will release them soon. 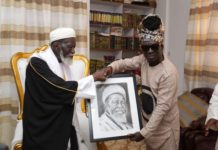 GHAMRO to constitute new board