The Eastern regional Police commander, DCOP Peterkin Yentumi Gyinae, says the police administration is in control of the Fulani Menace in the region.

According to him, measures had been adequately taken to curb the menace this year.

He said stakeholders’ meeting had been held between the region’s Security Council and warring parties to develop a roadmap aimed at preventing future clashes between them, adding that it had minimized since.

DCOP Gyinae disclosed this to the media Wednesday at the forecourt of the Regional police headquarters in Koforidua.

His assurance comes at the back of reports of destruction of farms by the cattle of Fulani herdsmen in some parts of the region.

He advised officers in the region to be professional in the discharge of their duties.

Many farming communities in the Upper Manya Krobo district of the region are likely to be hit with severe famine following the destruction of several acres of their farms by cattle of nomadic herdsmen.

Hunger scare had already engulfed the communities as they struggle to get food to eat, with others indebted to their creditors who provided them loans to plough their lands.

Communities such as Anyaboni resettlement area, Aframase, Akateng Poliwa, Terguanya, and others in the district had been severely affected by activities of the Fulani herdsmen thus calling on NADMO to come to their aid. 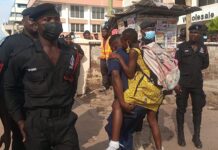