Singer Janet Jackson has at the age of 50 given birth to her first child, a baby boy, her publicist has confirmed.

A statement said the musician and her Qatari businessman husband, Wissam Al Mana, were “thrilled” to welcome the infant, Eissa Al Mana.

“Janet had a stress-free healthy delivery and is resting comfortably,” the publicist added.

Speculation about her pregnancy surfaced last April when she postponed her Unbreakable tour.

She posted a video on Twitter at the time in which she told fans that she was postponing the tour because “there’s been a sudden change”.

She said she wanted to focus on planning a family with her husband, whom she wed in 2012.

Jackson had earlier been spotted in London shopping for baby essentials.

Janet Jackson is far from the only famous face to give birth later in life.

Oscar-winning Halle Berry had her second child at 47, three years ago, and John Travolta’s wife Kelly Preston gave birth to her third child at 48.

Geena Davis – best known for her role in Thelma and Louise – became a mother later in life. Her first child, a girl, arrived when she was 46, followed two years later by twin boys.

But these mothers – and Jackson – are all positively young when compared to the world’s oldest new mothers.

There are at least three women in India who claimed to have given birth when at least two decades older than the pop singer. 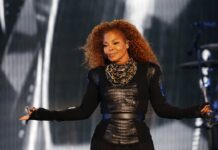 Janet Jackson reveals first documentary teaser: ‘This is my story, told by me’