Japanese car giant Toyota says will invest $10bn (£8.2bn) in the US over the next five years – the latest car giant to announce major investments.

He said it had nothing to do with President-elect Donald Trump’s hostility to imported cars, but was part of its existing strategy.

Mr Trump has threatened tax firms that make cars in Mexico for the US market.

Mr Lentz said the money was going on a new headquarters in Texas and upgrades to existing US car plants.

Earlier, BMW told the BBC that it was “absolutely” committed to a new plant in Mexico, despite Mr Trump’s opposition to such policies.

BMW is spending $1bn on a plant in Mexico, while other firms are investing in the US or moving production back.

On Sunday, Fiat Chrysler Automobiles (FCA) announced a $1bn plan to produce three Jeep models in the US.

FCA will also move the production of a Ram pickup truck from Mexico to the US.

Last week, Mr Trump criticised General Motors for building cars in Mexico for the US market.

“General Motors is sending Mexican-made model of Chevy Cruze to US car dealers tax-free across border. Make in USA or pay big border tax!” he tweeted.

He also threatened Toyota with a border tax if it went ahead with a new plant in Mexico.

On Monday, Mr Lentz said Toyota had been planning for the Mexico plant for at least two years before announcing the move in 2015 and that it was a long-term decision.

BMW sales and marketing director Ian Robertson told the BBC that the firm was “absolutely” committed its new plant in San Luis Potosi, which will make its 3 Series cars for sale across North America.

He added that the company was investing $1bn in its plant in South Carolina and pointed out that BMW was the biggest exporter of cars, in terms of value, from the US.

“I don’t think there’s any discussion that BMW is not at home in the United States. Yes we are building a plant in Mexico. Yes we built a plant in Brazil last year. Yes we are building plants in other parts of the world as our capacity increases. But that’s part of a normal strategic manufacturing direction,” Mr Robertson said.

Last week Ford cancelled a $1.6bn plan to build a plant in Mexico and instead decided to expand operations in Michigan.

Ford boss Mark Fields said the decision was partly due to falling sales of small cars and partly a “vote of confidence” in Mr Trump’s policies.

On Sunday, FCA said it would invest in a plant in Michigan, so that it can produce two new Jeep sports utility vehicles (SUVs) and take on the production of a Ram truck, currently made in Mexico.

Also, an Ohio plant will be retooled to make a new Jeep pickup truck.

Its announcement was the second phase of a plan, first outlined in January, to expand in the market for pickup trucks and SUVs. 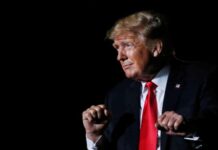