Controversial film producer, Socrate Sarfo, is not cut for a ministerial appointment, the CEO of Slip Music Mark Okraku Mantey has said.

According to him, he does not support the idea of making Mr. Sarfo the deputy minister for Tourism, culture and Creative Arts.

He said his choice for the said position was Kwadwo Antwi who has since been appointed by President Akufo-Addo as the acting boss of the Ghana Tourist Development Company Ltd (GTDC).

He said the deputy ministerial position is more of a management issue and that for him renders Mr. Sarfo unqualified for the position.

Since the president’s nomination of Catherine Ablema Afeku as the Minister for Tourism, Culture, and Creative Arts— the race for who to deputise her became a public debate.

The likes of Socrate Sarfo and Kojo Antwi have all been mentioned as possible names to be considered for the position. 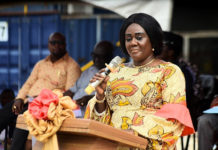 Year of Return to rake in $1.9b in revenue – Tourism minister