Spending a staggering US$13.9 million to construct a new mansion to house Ghana’s Vice President is ridiculously shocking and insulting, the Progressive People’s Party (PPP) has said.

The party thus called for a deliberate policy to mitigate such unbridled dissipation of the tax payer’s money in the future.

“The reason why we don’t want to put too much emphasis [on an investigation] is that you go round in circles and when you finish, you come and put the document before the Attorney General of the Republic. If she doesn’t have the political will to prosecute a member of the political class or elite, nothing will change,” he added.

The cost of putting up the mansion was revealed by the Vice President, Dr. Mahamudu Bawumia during a speech at the Launch of the “Good Corporate Governance Initiative” at the Kempinski Hotel in Accra on January 31.

Delivering his speech he said: “There was this whole brouhaha about this Vice President’s residence, I am sure you heard about it, so in the context of discussing this issue, there is supposed to be a vice president’s residence under construction…”

He continued that when he asked why the project had stalled, he was told that the contractor was owed a lot of money.

“So [I asked] how much is this house actually costing and I was shocked when I was told, can you believe in Ghana we are building a house to house our Vice President and this house is supposed to cost 13.9 million dollars,” he said.

Since the revelation, there had been calls for investigation to be launched to ascertain the processes leading to the award of the contract—a call the Communications Director of the governing New Patriotic Party (NPP) supports.

He thus revealed that the government is likely to probe the contract. 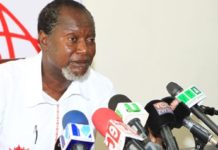