Yeji and its adjoining communities in the Pru District of the Brong Ahafo Region have been hit by premix fuel shortage.

For some days now, fisher folks and boat operators in Yeji and its environs have not received premix fuel for their operation.

This is affecting their operations as travelling on the Volta Lake is the major means of transportation in the area.

Yeji is a major market hub in the Brong Ahafo Region.

Chairman of the Yeji Boat Operators and fishermen Society, Noah Kwame Sarfo,  blames the shortage of the premix fuel on the absence of Premix Committee after the old ones were dissolved following the change of government.

“We have shortage of premix fuel here as a result of the change of government and it is really affecting business and movement here, boat owners are not getting it as well as fishermen and the situation has become unbearable. We are hoping that the Premix committee will be reconstituted so everything falls in place,” he told Starr News. 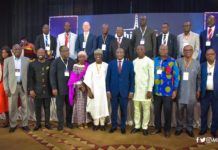