On March 7, 2017, StarrFMonline.com reported that the Joe Ghartey chaired committee requested for more time to complete its work.

The committee was expected to complete its work and reports in four weeks but was not able to and StarrFMonline.com has gathered that a member of parliament has applied to the committee to provide fresh evidence on the matter.

This comes at a time when the committee was about wrapping up its work, Starr News’ Parliamentary correspondent, Ibrahim Alhassan reported.

Speaking to the media Monday on the matter, the Deputy Majority Chief Whip, Mathew Nyindam assured that the report will be ready soon.

“I raise that issue with the majority leader…I asked him when this Joe Ghartey thing…report [will be ready] because the public is interested. We are also interested as a House because it is an alleged issue and we all have to clear it,” he said.

He added: “According to [Majority] leader a member said he has some kind of evidence to tender in. So, they have to hold on for him to bring it so that it doesn’t look like somebody is fighting against the other.”

The special parliamentary committee which was set up to probe the bribery claim against members of the appointments committee began sittings Wednesday, February 15.

The Member of Parliament for Bawku Central and Member of Parliament’s Appointments Committee, Mahama Ayariga,  in January accused the  Energy minister, Boakye Agyarko,  of attempting to bribe the minority members on the committee to clear him,  following his  vetting- but they rejected it.

According to him, the energy minister’s bribery attempt was made through the chairman of the committee, Joe Osei Owusu, which was subsequently given to the minority caucus through its chief whip, Muntaka Mubarak.

Both the minority chief whip and chairman Osei Owusu have denied the claim. 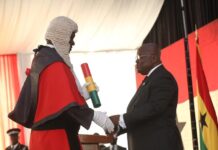