The Vice President Dr. Mahamudu Bawumia has described the Kintampo disaster as a tragic loss to the nation.

Nineteen persons died in the fatal incident after hilltop trees crashed on them following heavy rains on Sunday.

The victims were mostly students from the Wenchi Senior High School. The Ghana National Fire Service and the Police including other disaster management officials went through torrid period to rescue trapped revelers.

“A huge tree fell at the top when the rains began and crashed the revelers,” an eyewitness told Starr News. “So far we have counted 19 people. Most of them are students of the Wenchi Senior High School. Others are tourists.”

About 22 others are receiving treatment at the Kintampo Government Hospital.

Dr. Bawumia who stormed the disaster site Monday morning stated that the next line of action will be taken after investigations into the accident is concluded.

“We have lost 18 young men and women at the prime of their lives who were in school trying to make a difference to their lives; we have lost them under very tragic circumstances. We will allow the necessary investigations to go on as we see what we can do for the affected families,” he said. 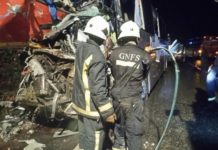 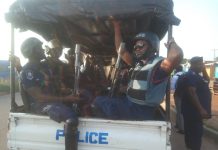 Violence at Kintampo; One feared dead, others injured