Five suspected  armed robbers including a teacher have been arranged before the Koforidua Circuit Court ‘B’ for allegedly robbing Kwadwo Afari Djan, the immediate past District Chief Executive for Akuapem South in the Eastern region .

The sixth accused person  identified only as Brown is at large .

The suspects have been charged  with two counts; conspiracy to commit robbery  and Robbery .

Presenting the facts of the case, the Prosecuting officer from the Attorney General’s Department, Kwasi Opare Wiredu ,explained to the Court that ,the immediate past District Chief Executive for Akuapem South  Mr. Afari Djan  is the complainant in the case  whiles the accused persons are friends and residents in the same district .

According to the Prosecutor, the third accused persons, then recruited the second, fourth, fifth  and sixth accused persons, Kofi Jonas a.k.a Odoi , Boadu Benjamin ,Arhin and  Brown respectively towards robbing the Complainant .

The six accused persons in a rehearsed fashion, attacked the residence of the Complainant and broke into his room at 2:30am with two locally manufactured single barrel short guns, one pistol, a double barrel gun and a machete .

The accused persons subjected  the DCE , his wife and  son to inhumane treatment  during the robbery especially when the complainant was unable to release to them the huge amount anticipated to get.

The Prosecuting officer , Opare Wiredu further told the court that, after about an hour of operation in the Complaint residence,the accused persons ransacked the entire house and made away with  cash sum of Ghc250 , an infinix, mobile phone valued at ghc600 , one Nokia Phone valued at ghc250 and some drinks including Black Label.

The accused persons pleaded not guilty to the two counts of conspiracy to commit robbery and robbery  when they appeared before court on Wednesday.

The Presiding Judge, Her Honour Mercy Adei Kotei , has adjourned the case to April 25,2017,  for the trial to begin.

Meanwhile,  the Judge directed that one of the accused persons be provided health care after complaining of severe  waist pains. 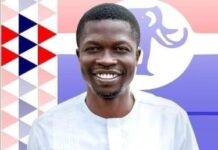