If you ever thought that popular playwright and life coach, Uncle Ebo Whyte, has achieved everything there is to in his field of endeavor, you had the wrong muse – as he still has some aspiration he hopes to get down.

The venerated playwright, who has produced and directed a deluge of best-selling plays in the last nine years – has unflinching hopes of staging a mega play that would involve only public figures in Ghana.

Speaking on Peace FM’s ‘Entertainment Review’, he revealed his longstanding dream of staging a play that would cast public figures from the fields of politics, religion, finance, media, sports and administration.

Although, he has not placed a timeline to the realization of this yearning, he promises that, it would be soon.

On why he’s not starred celebrities in any of his plays thus far, Uncle Ebo Whyte stated that, he has room for celebrities in his productions, however, the celebrities must show interest and must be extremely disciplined and humble.

Without the use of any celebrity, he’s been able to sell 36 plays and there’s no room in his Production Unit for the display of any form of arrogance, pride and self-aggrandizement from any celebrity.

Roverman Productions is set the second play thus far in the year, ‘Damaged Good’, which is directed and produced by Uncle Ebo Whyte. 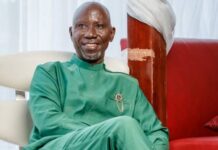