Golfer Tiger Woods was found “asleep at the wheel” with the engine running when he was arrested, US media reports say.

The former world number one golfer was found at the wheel of his Mercedes, in the right lane, and had to be woken by a police officer early on Monday.

Charged with Driving Under the Influence (DUI), Mr Woods blamed “an unexpected reaction to prescribed medication”.

He maintains that alcohol was “not involved” in the incident.

“Woods had extremely slow and slurred speech,” a copy of the police report published by US outlets said. He was “co-operative” but “confused”.

The results sheet from his breathalyser test noted he was “unable to walk alone”, but results showed he “blew zeroes” – indicating a lack of alcohol in his breath.

Mr Woods initially told the arresting officer he was coming back from Los Angeles, having been golfing, and said he did not know where he was. He then changed his story about where he was coming from and going to, the police report says.

Officers also recorded that Mr Woods had failed all but one of the roadside tests – including standing on one leg and the “walk and turn” test.

“I understand the severity of what I did and I take full responsibility for my actions,” Mr Woods said in a statement earlier.

“I want the public to know that alcohol was not involved. What happened was an unexpected reaction to prescribed medications. I didn’t realise the mix of medications had affected me so strongly.”

Police released a mugshot of Mr Woods, looking unshaven and unkempt, following his arrest in the town of Jupiter.

The police document also revealed some of the golfer’s medical details, including a history of multiple knee and Achilles tendon surgeries.

Mr Woods also told police he was taking several prescription medications. The athlete has been recovering from back surgery – his fourth such operation – and is expected to be out of action until October.

In his most recent comment about his health, he wrote that the surgery had relieved terrible pain and that he had not “felt this good in years”.

Police records show the 41-year-old golfer was pulled over at about 03:00 local time (07:00 GMT) near his home in Jupiter and later taken into custody.

He was released from Palm Beach County jail at 10:30 local time.

Mr Woods is due in court for a mandatory appearance in early July. 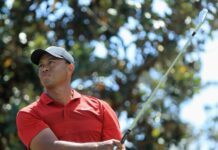