The Rector of Mount Crest University College, (MCU), Kwaku Ansa-Asare has accused the Executive Secretary of National Accreditation Board, Kwame Dattey and the Chief Justice Sophia Akuffo of working to collapse the school.

According to him, the embargo placed on fresh admissions into the law faculty of the school by the two state officials is unlawful and abusive.

Speaking at the inauguration of new Council Members for the school, the rector appealed to the President to intervene in order to save the school from total collapse.

“Before the end of November, Council will constitute a delegation to meet government, the NAB, and then the Judicial Service because the Chief Justice is also particularly against the location of Mount Crest University and she is seeking also to destroy Mount Crest University, what hurts is that she is from Akropong and I am from Lartey and its appears that it is our own people who have become out enemy. I will say it now, I want you to convey to the President that this is what is going on because the letter from National Accreditation Board to us that we should seize taking any new student was on the letterhead of the judicial service and we are told it was written by a supreme court Judge Sophia Akuffo who is now the Chief Justice “.

The Rector also fingered the Executive Secretary of NAB for being oppressive, divisive and destructive urging the government to investigate the circumstances that led to placing of the embargo.

He added that “we have been disabled from admitting Law Students primarily because we have a very deplorable University Institutions. You are here now and you’ve seen even our modest beginning is not in a deplorable condition”.

The Rector continued, “I want you, honourable members in our midst to come and visit us in our Kanda Campus to see for yourself whether we have the facilities conducive to academic learning or academic business. We also want to appeal to you to use your good offices to come and see for yourselves whether this year we have admitted any law student so that you can advise government. If we have, then the embargo should continue if we haven’t then it should be lifted because it is unjustifiable, it is excessive, it is capricious, it is arbitrary and its amount to  abuse”

On June 13, 2016, a Joint Quality Monitoring and Verification Panel of the National Accreditation Board/General Legal Council (NAB/GLC), visited Mountcrest and concluded that the student/staff ratio was beyond the acceptable level and directed the school to revise it before January 31 this year.

But the University contends that before the January 31 deadline, public notices appeared in national newspapers and social media announcing that NAB had placed an embargo on fresh admissions into their Law programmes, adding the Board has deprived the university the opportunity to rectify the situation as requested in a letter dated November 30, and addressed to them. 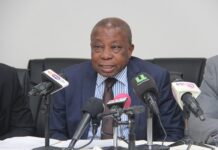