Thirteen students of the Islamic Senior High School (ISSEC) in Kumasi are facing the school’s Disciplinary Committee for filming themselves in their classroom twerking to Patapaa’s ‘One Corner’ hit song which has become a craze beyond Ghana.

The 13 students, comprising nine females and four males, were said to have taken the video and shared it on their personal Facebook pages and on YouTube.

The circulation of the video prompted a swift action by school authorities who summoned them for interrogation, StarrFMonline.com has learnt.

Parents of the students were invited by school authorities on Tuesday for a meeting which lasted for hours.

The matter has been referred to the Ashanti Regional Education Directorate.

The ‘One Corner’ dance is a highly sexualised dance characterised by a lot of twirling and twerking and has gained massive publicity in Ghana and beyond. 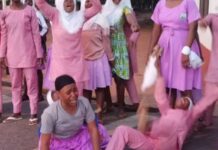