The component of domestic tax collection mobilised and processed through GCNet’s Total Revenue Integrated Processing System (tripsTM) in 2017 hit GH¢15.7billion representing a thirty two per cent (32%) increase over the same period in 2016.

There has been a sustained increase in the component of domestic tax collection processed through Total Revenue Integrated Processing System (tripsTM) over the past four years, from GH¢3 billion that was recorded in 2014, to almost GH¢9billion in 2015 and to almost GH¢12 billion in 2016.

The increase in tax collection through tripsTM contributing to the overall domestic tax revenue has been achieved with the further deployment of more than 45 new offices by the Ghana Revenue Authority (GRA) in 2017 bringing the total number of Live Offices now using the Total Revenue Integrated Processing System (tripsTM) to 59.

The Total Revenue Integrated Processing System (tripsTM) is software for tax administration under the e-Government project headed by the Ministry of Communication under the auspices of the Ministry of Finance; tripsTM seeks to streamline and bring transparency to the business operations of the GRA Domestic Tax Revenue Division (DTRD).

December 2017 recorded the highest monthly revenue collection of GH¢2.6 billion in tripsTM, followed by the second highest of GH¢1.7 billion in Sept 2017. This can be compared to the same period in 2016 when GH¢1.5 billion and GH¢1.1 billion were mobilised respectively.

Data available also indicates that monthly collection was over the GH¢1billion threshold in ten months of the year, 2017 with February and May being slightly lower. The operationalisation of 59 out of 69 tax offices represents a nationwide presence, which has facilitated enhanced coverage in terms of the tax net, enabling greater revenue mobilisation. The nationwide roll-out is a landmark achievement for the GRA and the country marking the first time that Ghana has had a nationwide computerised tax system.

The expanded roll out of tripsTM, across all offices of the Domestic Tax Revenue Division of the Ghana Revenue Authority nationwide, will enhance revenue mobilisation efforts in 2018, helping to meet national development needs.

The deployment of tripsTM is part of the bigger e-Government solution developed and deployed concurrently for the Ghana Revenue Authority and the Registrar General’s Department in 2011 by Ghana Community Network Services Limited (GCNet), with a self-service portal that provides online services to Citizens. 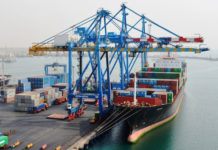