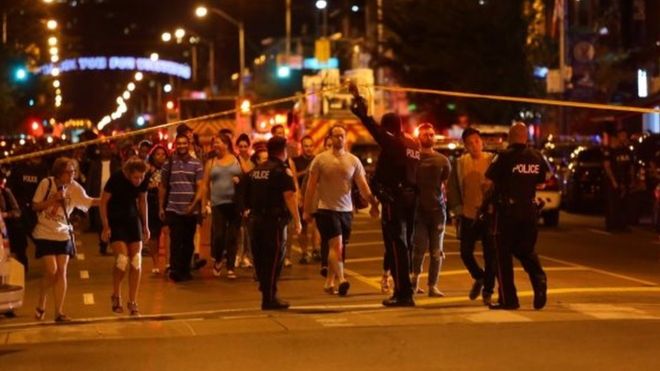 A gunman has opened fire on a busy avenue in Toronto, killing a young woman and injuring 13 other people, one of them critically, police say.

The victim critically injured in the Canadian city’s Greektown district is a girl of eight or nine, they add.

The suspect is dead, reportedly killed in an exchange of shots.

The attacked happened on Danforth Avenue on Sunday evening, when the area was teeming with people, Canada’s Globe And Mail newspaper reports.

The motive for the shooting, which reportedly targeted a restaurant, is still unclear.

In a video clip shared by Canadian media, a man in a cap and carrying a shoulder bag can be seen stopping on a pavement and pulling out a handgun before firing shots.

Some of the victims were treated at the scene, while others were taken to local hospitals.

Police are appealing for witnesses.

The premier of the province of Ontario, Doug Ford, tweeted a message of support to the victims of the attack.

Jody Steinhauer told CBC News she was with her family in a restaurant in the area when she heard what sounded like 10 to 15 blasts of firecrackers.

“We started to hear people scream out front,” she said.