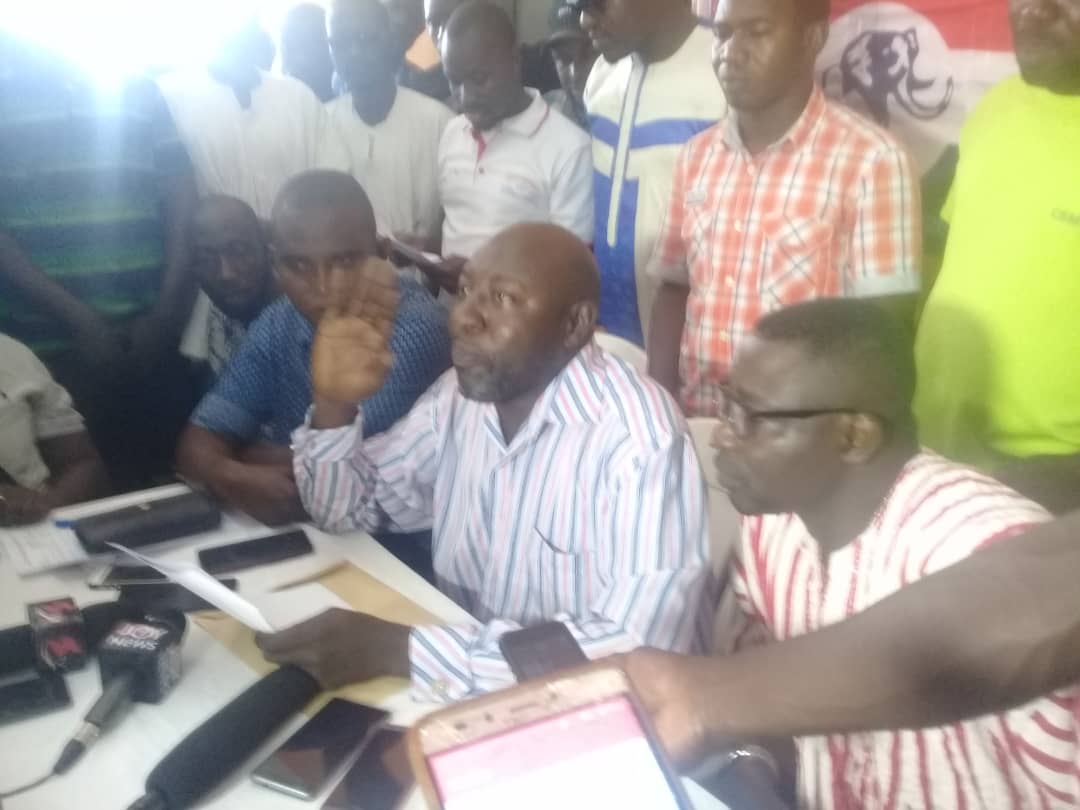 New Patriotic Party Electoral Area Coordinators and Polling Station Officers of Tamale South and Central constituencies in the Northern Region have demanded an apology from the executives of the two constituencies who held a news conference Wednesday calling for the Tamale Metropolitan Chief Executive, Musa Superior, to be sacked.

Some leaders of the two constituencies in the metropolis at a tensed and sombre conference Wednesday addressed by the South’s constituency secretary, Yussif Danjuma, levelled a raft of allegations against the Tamale Mayor and ordered President Akufo-Addo to dismiss him with immediate effect.

The constituency executives alleged the Mayor was awarding contracts to himself and cronies, undermining their authority and that of the regional minister and his deputy, hoarding the assembly’s resources to the Mion constituency in preparation of his political ambition there and reneging on his promise to award contracts to them and support the party.

Without giving timelines, the angry executives offered President Akufo-Addo the opportunity to choose between them and the Mayor before warning of a red wave that would hit the party if the president failed to heed their demands.

However, in a massive show of support Thursday, dozens of party supporters massed up at the Centre for Culture and National Affairs complex in Tamale to hold a counter-rally calling on the president to reject the calls by the executives of the two constituencies—south and central.

The supporters addressed the media before staging a street procession with motorbikes to the Mayor’s office to assure and stamp their support and also congratulate him for his bold decisions and massive reforms that are changing Tamale to befit its current position of being the fourth largest economy of the country.

Addressing the joint news conference, Dawda Abdul Rahman, leader of the Tamale South Electoral Area officers of the NPP condemned the dismissal calls by the constituencies’ executives, stating that the polling stations executives and electoral area coordinators of both constituencies disassociate themselves from such “heinous agenda”.

The local executives said they were not consulted by the executives and they do not support the content of their petition for the outright dismissal of Musah Superior.

“Fellow Party men, were are outraged that the party executives of NPP would resort to such a bestial approach of threatening a no mean person but the president of the Republic in order to get him to meet their demands”, Dawda said in the prepared statement, adding that “the following questions beg for answers;

Touching on the specific allegation against the Mayor that he awarded contracts to himself and cronies, the polling station executives and area coordinators demanded proof after refuting the claim and slammed the executives of lacking “basic knowledge on the procurement laws of Ghana”.

“The MCE does not unilaterally award contracts. It is a known fact that contracts are tendered for and subsequently awarded to qualified bidders. The said executives also alleged that the MCE has been awarding contracts to himself but they have failed to provide to us single evidence to back their claims. Until this is done, we will treat this claim as baseless news from the grapevine”, the local executives noted.

They praised the Mayor’s ruthless pursuit of his social development policies which they claim have received recommendations from chiefs, opinion leaders and other well-meaning residents beyond the country.  They also congratulated the Mayor for recently winning a prestigious award as best Mayor in West Africa for 2018 by the West African Regional Magazine.

The executives also said they have ample evidence that shows a plot being sponsored by the Regional Organizer, Alhaji Rashid Salifu COP, whose remarks on radio a month ago triggered this controversy, against the Mayor with the net agenda to remove the Mayor from office and replace him with his parochial choice.

They alleged further that the Regional Organizer was conspiring for the removal of Musa Superior because “he failed to get the MCE to pay him for an illegal contract he procured during the transition period”.

They, therefore, demanded, in conclusion, a separate “unconditional apologies” to President Akufo-Addo, the MCE and residents of Tamale “for bringing the name of the metropolis, party and government into disrepute”.

“Should they failed to do so, we will have no option than to invoke Article 10 of the NPP constitution to seek their removal from office as Executives of their Noble Party to save us such embarrassment in the future”, The Tamale South constituency electoral area coordinator demanded.