“I have noted all our mistakes. We realized campaign funds were diverted, but we have learnt our lessons. We will ensure campaign funds go through the right channel to get the campaign done. In 2020, we must rise up and be vigilant. I am confident that at the end of the polls, NDC will be declared winner.”

The above quote was from no other person than former president John Dramani Mahama when he kicked off his campaign tour in the Central region to become the National Democratic Congress (NDC) flagbearer for 2020.

The truth is bitter but it must be told without fear or favour, especially when there is a crucial hurdle to cross to achieve an objective.

Mr Mahama will not talk without concrete evidence. He won’t speak against his own to score cheap political points. He was mindful about the political implications of his statement but the truth must be told and it must be spewed as it is without any coating.

Let’s not beat about the bush. The General Secretary of the NDC Johnson Asiedu Nketiah must take full responsibility for the mess Mr. Mahama is talking about. Per the party’s constitution the General Secretary is the chief administrator, in other words, the CEO of the party at the headquarters.

He sees to the day to day running of the party and in principle is more powerful than even the national chairman of the party. That is why he is allowed to sit in cabinet meetings.

Also, Mr. Nketiah as the General Secretary of the NDC, naturally was the campaign manager of the flagbearer during the 2016 elections. He must ensure that every logistic, including and especially, campaign funds trickle down to the very grassroot of the party from the regional, constituency all the way to the ward levels of the party.

As the CEO of the party, he was responsible for the welfare and wellbeing of the party supporters and so if at any point in time there is a breakdown in the supply chain he must act and failure to act affects the very top which eventually led to the massive and disgraceful defeat of our flagbearer.

Mahama was not only humiliated in an election which should have been a walk in the park for the Akatamanso family, but the ineffectiveness and apathetic attitude of Mr. Asiedu Nketiah who hijacked every resources resulted in the significant number of seats the party lost in parliament including his own hometown – Tain.

What a shameful disgrace.

Mr. Nketiah does not have the moral right to go back to the delegates to renew his mandate. For what? To keep the party in opposition again!!! Hell no. It must not happen. NEVER AGAIN! Delegates must not allow themselves to be fooled by money to keep such personality who does not have the party’s interest at heart but only there for personal gratification.

It is time for change. The General Secretary position is not Asiedu Nketiah’s perpetual property. He must make way for a new face, fresh ideas and someone who is ready to free resources such as Koku Anyidoho for structures within the party to function.

The NDC is doomed if we allow Asiedu Nketiah to continue occupying the position of General Secretary. Election 2016 has exposed him and about time we wise up to retire him. Asiedu Nketiah must GO! 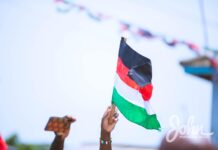