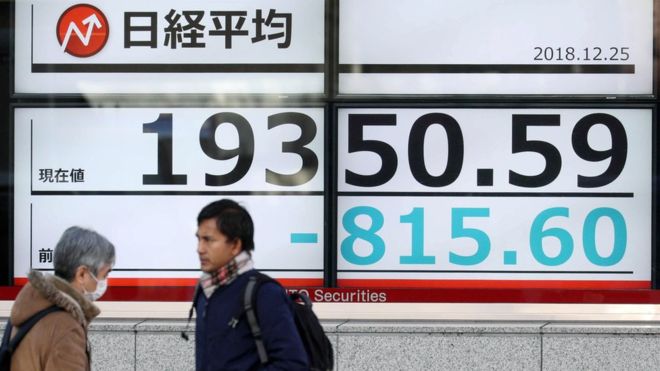 The Nikkei closed down 5% on Tuesday, its worst finish since April 2017. Indexes in Shanghai, Bangkok and Taiwan also fell.

Investors have been concerned about President Trump’s dispute with the US central bank chief and another government shutdown.

US stocks had their worst Christmas Eve on record.

The Dow Jones index of 30 leading companies fell more than 650 points on Monday, and is on track for its worst December since 1931, during the Great Depression.

Many financial markets in Asia, Europe and North America are closed on Tuesday for Christmas.

In China, the Shanghai composite index fell more than 2% on Tuesday morning.

The Asian markets are believed to be largely reacting to movement in the US and an ensuing shares sell-off by concerned investors.

US-China trade tensions are a factor, as well as reports that President Donald Trump has discussed firing the chairman of the US central bank, Jerome Powell.

On Monday, President Trump lashed out at the Federal Reserve, the US central bank, as the stock market plunged.

The president said the Fed was “the only problem” of the US economy.

Mr Trump continually boasted about Wall Street’s steep climb during the first year of his presidency, but has sought to deflect blame since markets hit a rough patch in 2018.

On Sunday US Treasury Secretary Steven Mnuchin took the unusual step of calling the chief executives of America’s six largest banks in a bid to soothe market jitters.

Afterwards, the Treasury shared a statement about Mr Mnuchin’s phone call, confirming that the banks’ chief executives had “ample liquidity available for lending to consumer, business markets, and all other market operations”.

“The markets continue to function properly,” it added.

On Monday, Mr Mnuchin called top market regulators and officials from the US central bank to allay fears.