Former Chancellor George Osborne has said delaying the UK’s exit from the EU is now the “most likely” option.

The UK has to choose between no deal – which he compared to Russian roulette – or no Brexit for now, he told the BBC.

MPs are proposing alternative plans to the PM’s deal with the EU, including seeking an extension to the UK’s exit date – it is due to leave on 29 March.

But the prime minister has said the “right way” to rule out no-deal Brexit is to approve her withdrawal agreement.

Theresa May has said it is “impossible” to rule out leaving without a deal any other way because, under current law, the UK will exit the EU on 29 March, whether or not a deal has been struck.

Speaking to BBC business editor Simon Jack in Davos, Mr Osborne said that the prospect of no deal meant “the gun is held to the British economy’s head”.

“Russian roulette is a game which you should never play because there’s a one-in-six chance that the bullet goes into your head,” he said.

Mr Osborne, who campaigned for Remain, said his successor Philip Hammond had “sensibly” told businesses that leaving without a deal was not a possibility.

“But we now need to hear it from the British prime minister,” he said.

Mr Osborne, now editor of the Evening Standard newspaper in London, said that although there might be a majority in Parliament to prevent no deal, it was not clear how MPs would achieve it.

‘Run the clock down’

Labour’s shadow chancellor John McDonnell told the BBC’s Newsnight that it was “highly likely” the party would back an amendment put forward by Labour MP Yvette Cooper, with support from MPs in other parties.

It would give time for a bill to suspend the Article 50 process for leaving the EU if a new deal has not been agreed with Brussels by the end of February.

“I think it’s increasingly likely already that we’ll have to take that option because the government has run the clock down,” Mr McDonnell said. 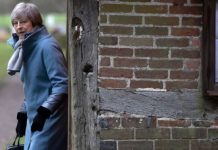 Theresa May to quit on June 7 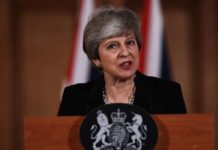