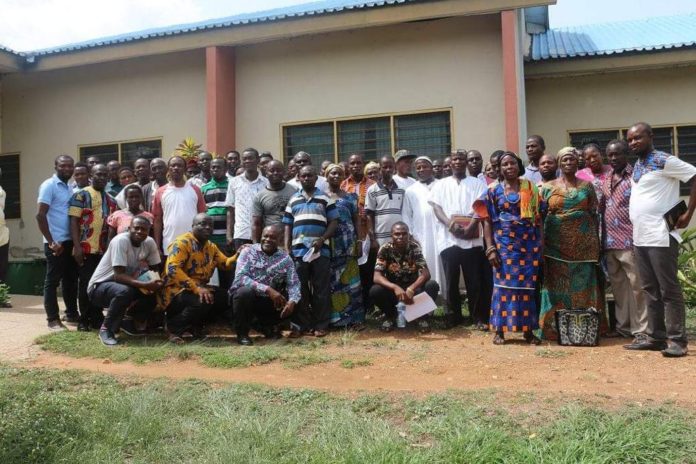 The AgortimeZiope District in the Volta Region has recorded some advancement in ensuring the execution of capital development projects in district.

The district scored 69 per cent in the community performance assessment conducted by Carenet Ghana, an NGO, Oxfam in Ghana and ISODECas part of Ghana’s Strengthening Accountability Mechanisms (GSAM) project.

Mr. Davis Selasi Kofi Sunu, project officer of Carenet Ghana, who made this known at a Townhall meeting with assembly and community members at Kpetoe explained thatthe district performed well in Community involvement in Project initiation, and also in ensuring that all projects are captured in the medium term plan.

The meeting was aimed at updating stakeholders on the performance of the district Assembly in executing two of such capital development projects currently being monitored by the NGOs in the district, in order to identify weaknesses and fashion out avenues to address them so as to ensure better execution of future projects.

The projects included the construction ofa 3 unit classroom block each at Hornugo No.2 and Afegame communities. These projects were awarded in March, 2018 to be completed in August, 2018 with funding from the District Assembly Common Fund.

Some of the community assessment areas for the projects being monitored included planning and initiation of project, contractor selection and contracting, execution and citizens’ perception of the project benefits.

The projects are however beyond schedule. The yet to be completed projects are currently at the window level. The Assembly has attributed the situation to delays in funding.

The District Chief Executive for the area, David Dickson Dzokpe, who although accepted the outcomes of some areas of the assessment, insisted that the assembly could not be faulted in the failure to meet project deadlines.

He indicated that though issues of funding reigned supreme in getting the school buildings completed erratic weather conditions had also immensely contributed to the delays.

Other issues of concern which were expressed included Procurement plan, invitation for bids for the Hornugo project which was only done via the District assembly notice board which pointed to a dire need for adherence to the procurement Act.

The DCE has however, resolved to ensure that the assembly complies with the Act, as well as guarantee an effective monitoring and supervision of projects so they are handed over promptly for community utilisation.

The Ghana’s Strengthening Accountability Mechanisms (GSAM) is a five-year social accountability project (2014-2019) that seeks to “strengthen citizens’ oversight of capital projects to improve local government transparency, accountability and performance in 100 districts of Ghana.”

It is being funded by the United States Agency for International Development (USAID) and implemented by the GSAM Consortium – CARE, OXFAM and ISODEC – together with the Ghana Audit Service, the participating District and Municipal Assemblies and 26 other Civil Society Organizations