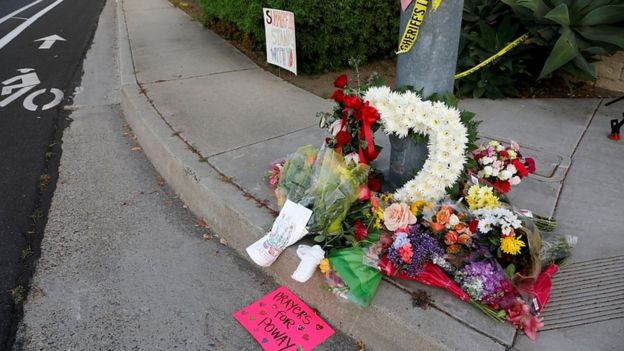 A gunman opened fire at a synagogue in California on Saturday, killing one woman and wounding three other people, police said.

A 19-year-old man named as John Earnest was arrested after the attack, in Poway, north of the city of San Diego.

The synagogue had been hosting a Passover celebration when the gunman burst in, reports said.

Police did not suggest a motive but US President Donald Trump said the attack appeared to be “a hate crime”.

The attack comes exactly six months after a shooting in Pittsburgh in which 11 people were killed, thought to be the worst anti-Semitic attack in recent US history.

In the letter, which appeared on the online forum 8chan hours before the attack, the author – who identified himself as John Earnest – said he was inspired by the attack on two Christchurch mosques last month, as well as the Pittsburgh shooting.

Authorities later said Mr Earnest was under investigation in connection with a fire at a mosque last month.

“During the shooting, four individuals were wounded and transported to Palomar hospital,” Sheriff Gore said. “One succumbed to their wounds. The other three are in stable condition.”

Mayor Steve Vaus said the rabbi had been shot in the hand. “For this to happen only a week later at the end of the Passover, only a week after Easter is horrific,” Mr Vaus told MSNBC.

How did the attack unfold?

Sheriff Gore said officers were called to the Chabad synagogue just before 11:30 (18:30 GMT) after the man opened fire with an “AR-15 type” assault rifle.

He said an off-duty border patrol officer fired at the suspect as he fled the scene in a vehicle, but did not hit him.