Speaking to KOD and Cookie Tee on Starr Drive Friday, he said “people get trapped in these record deals, when there is a new hot track and artiste signed, they focus on him or her, so you struggle to get your music out.”

According to him, musicians can harness the opportunities on the internet to make their music go global.

”You can go on to the internet and make your song blow out,” he said.

He, however, revealed that instead of bagging record deals, he would rather opt for distribution deals in online stores to boost online streaming, adding that he is in the process of signing one of those deals.

Touching on why he left his former record label BBnZ, he said “it was a lot of growing that I had to do. We had to part ways at a point and I’m on good terms with them.”

E.L revealed that he is working on a new album which would consist of various genres, but would have Afrocentric features on every song.

He is currently promoting his new single and video titled “Higher.” 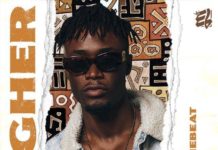 Sakodie yet to reply my ‘collabo’ request – E.L