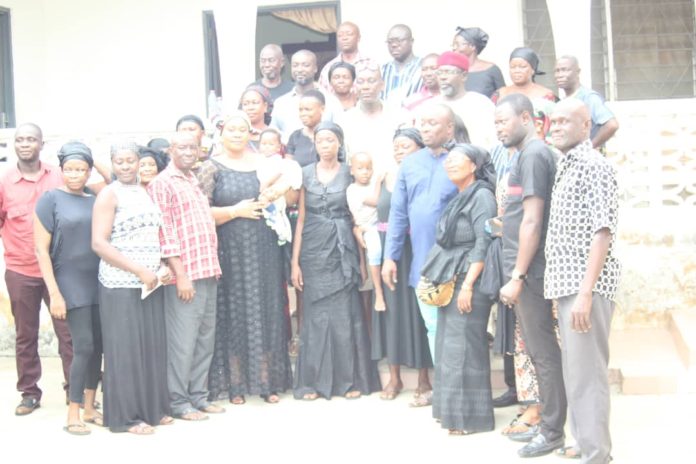 The Eastern Regional Women’s Wing of the opposition National Democratic Congress (NDC) has commiserate with the  family of the murdered  Asiakwa Salvation Army Basic School teacher.

The Party also promised to support the family to provide befitting burial for their late relative.

Meanwhile, the Regional Women’s Organizer Shirley Naana Ampem on behalf of the party announced to adopt and sponsor the education of four (4) year old Kwadwo Somuah Bosompem – second Child of the Deceased from Basic School to the University.

She told the bereaved family that the gesture was not to score political point but to support and encourage their fellow Woman who has suddenly become a widow due to a bizarre circumstance that has ended the life of her husband.

She however joined calls for justice to be served while urging government to step up efforts to curb the growing state of insecurity in the Country.

The Head of the bereaved family Opanyin Agyare recounted the callous circumstance in which the deceased teacher was allegedly killed by the six formal students of the School reiterating that justice is what the family is craving.

Opanyin Agyare said the family has slated July 26, 2019 for the burial of their kinsman.

George Somuah Bosompem, was the steward of Methodist Church and a Religious and Moral Education as well as Twi Teacher at Salvation Army Basic School.

He was allegedly brutalized to death by six young men for protesting against the invasion of the school farms by wee smokers who steal snails and defecate in the school.

The accused are facing charges of conspiracy to commit crime to wit murder and Murder .