The Vice President of Ghana, Dr Mahamudu Bawumia, has underscored the Ghana Government’s commitment to improving the living standards of cocoa farmers by ensuring they receive greater benefits for their toil.

Speaking at the first ever Stakeholder Engagement on Farmer Income in Accra on Tuesday 11th June, 2019, Vice President urged stakeholders in the cocoa value chain, including Trade Houses, Cocoa Processors and Chocolate Manufacturers, to join the Governments of Ghana and Cote d’Ivoire to address the high income disparity between farmers and the end users of cocoa products.

With 65% of global production, Ghana and Cote d’Ivoire are co-operating to tackle common challenges in the production and marketing of cocoa, and to create a conducive platform for effective engagement with traders, processors, manufacturers, and retailers on all relevant issues of mutual interest, including farmers’ income.

Alluding to the poor return farmers receive for the backbreaking effort they put into growing the golden bean, Vice President Bawumia expressed worry about the fact that the majority of farmers are unable to cater adequately for their family, beyond mere poverty existence, describing the situation as “unconscionable.”

“It is startling to learn from the President of the World Cocoa Foundation that only 6 percent of total value of chocolate goes to farmers. The percentage may be lower in the case of cosmetics and pharmaceutical end uses” Vice President Bawumia stated.

“It is to this end that our governments (Ghana and Cote d’Ivoire) have agreed that we offer the farmer a fair share of the wealth that the industry generates. We must do this for good reason.”

Vice President Bawumia noted that the social and economic status of the average cocoa farmer in Ghana and Cote d’Ivoire is not attractive to the next generation of cocoa farmers, putting the industry at substantial risk to the national economy both in its contribution to employment and to GDP.

Explaining that the cocoa supply chain runs from landowners/farmers and farm hands to cocoa buying agents, transporters, processors or grinders to manufacturers Vice President Bawumia questioned whether the wealth generated along the value chain is distributed fairly along the supply chain, indicating that evidence suggests that may not be the case.

“Poverty levels among cocoa farmers who are at the root of both the supply and value chain continue to raise concerns. The irony here is that the primary risk takers are also the helpless price takers.”

The Government of Ghana, Vice President Bawumia maintained, has been supporting the Ghana Cocoa Board to implement various interventions to enable the farmers to improve farm productivity, preserve the ecosystem, and discourage unethical labour practices. However, without a favourable price, the effects of these efforts will not be enough to change the situation of the farmer.

“Ladies and gentlemen, a satisfactory price of cocoa beans will go a long way to complement the government’s investments in rural infrastructure and improve the wellbeing of the communities.

“At this meeting in Accra today, we request your commitment to help tackle calls to guarantee a living income for farmers beyond mere poverty level. We need to develop an agenda and a roadmap to tackling this challenge.

“We are hopeful of achieving consensus with you on this subject. The Governments of Ghana and Cote d’Ivoire are united to achieve better living standards for cocoa producers and instil efficiency in our domestic supply chains,” the Vice President pledged.

The data points to your ‘monumental failure’ – Ato Forson to Bawumia 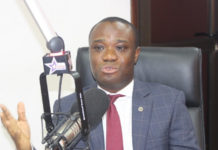