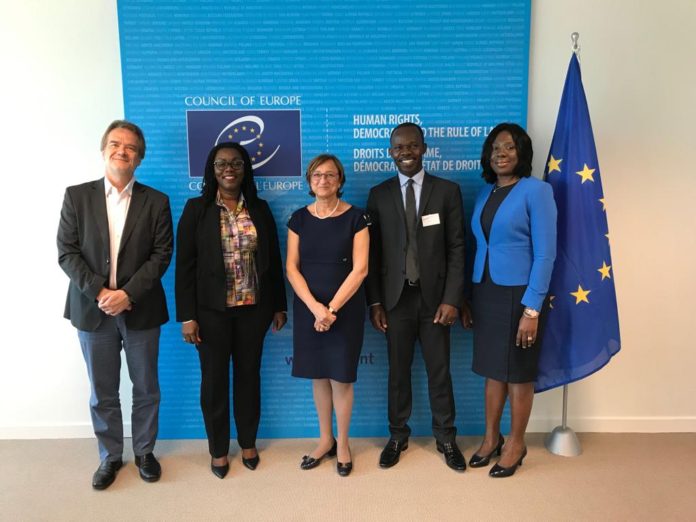 Ghana’s Communications Minister, Ursula Owusu Ekuful, l has held bilateral meetings with the Deputy Secretary-General of the Council of Europe, Gabriella Battaini-Dragoni, the Director of Information Society, Jan Kleijssen, the Head of the Cybercrime Convention, Alexander Seger on the sidelines of the 21st T-CY Plenary in Strasbourg, France on a possible collaboration between Ghana and the Council of Europe to mitigate the disruptive impact of Artificial intelligence.

Remarking during the meeting, Mr. Kleijssen commended Ghana on its leading role in the fight against cybercrime and ensuring data protection and applauded Ghana for ratifying the Budapest Convention, Malabo Convention and hosting the widely acclaimed  first ever  International Data Protection and Privacy Conference for the Africa region  recently  in Ghana (from the 27th – 28th June 2019).

He also  extended a special invitation to Mrs. Owusu Ekuful to participate in the global cybercrime conference, Octopus Conference scheduled from the 20th to the 22nd of November, 2019.

On her part, Ms Battaini-Dragoni said the Council of Europe has selected Ghana as the hub for Capacity building in the area of cybercrime and electronic evidence among the English-speaking West Africa countries.

She cited political commitment by the Ghanaian authorities and the expertise developed through the GLACY+ programme in which criminal justice practitioners have been trained as Trainers, as the basis for the Council’s decision. She commended the excellent work being done already by the trained Ghanaian judges, prosecutors and other officials in building the capacity on their peers on the continent and beyond.

She praised the work of the Cybercrime Programmes Office, headed by Mr Alexander Seger, for the work being done in getting African countries to accede to the Budapest Convention.

In her response, Mrs Owusu Ekuful spoke on the current training for Data Protection Officers and indicated the need for institutional support for the Data Protection Commission.

She also mentioned that Ghana has developed a draft Cybersecurity Bill and invited the Council of Europe to review it and as part of the stakeholder engagement processes for their comments and inputs. The Minister indicated that the Bill is intended to meet Ghana’s domestic requirements and also international conventions, including the Budapest Convention of which Ghana is a state party.

She further emphasized the need for cybersecurity capacity building for public sector officials including Ministers of State, Members of Parliament (MPs), Chief Directors, and Officials from the Drafting Division of the office of the Attorney General to ensure effective understanding and collaboration among stakeholders on the Bill.

She indicated Ghana’s commitment to accede to the Council of Europe’s Convention on Data Protection as this is in line with the selection of Ghana to host the Secretariat of the African Continental Free Trade Area ((AfCFTA) which was announced early this week.