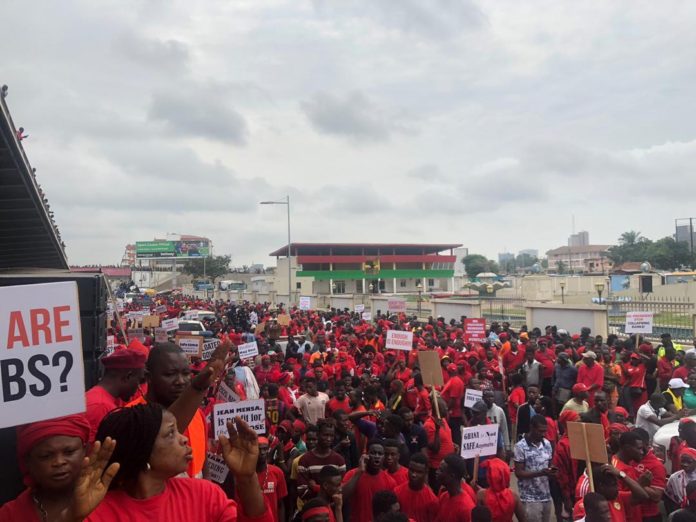 Scores of Ghanaians on Tuesday poured onto the streets of Ghana’s capital, Accra, to register their displeasure in what they say is growing intolerance and bad governance being witnessed under President Akufo-Addo’s administration.

“The total disregard for the views of the masses, the massive corruptions, the CDD report, and 9.6 billion cedis has been lost. All of these myriads of bad governance, incompetence, corruption, ineptitude, intolerance and attacks on dissent and free expression is why I am here to join the Kum Ye Preko demonstration,” Member of Ghana’s Parliament for North Tongu, Samuel Okujeto Ablakwa said.

“Clearly, it is bad. This has been a disaster of a government and we will not wait to the end of 2020. Look at what they tried to do with the new parliamentary chamber and playing hanky-panky with us.

“We must show this government that the people of this country will rise up and protest against misrule, bad governance, intolerance and total ineptitude,” he told Starr News Sefanam Agbogbli who was marching with the demonstrators.

Lead Organiser of the demonstration, Bernard Mornah told the media the demonstration had been triggered by the hardships in the country coupled with attacks on the media, the latest was the arrest and alleged torture of Deputy Editor of online news portal, MordenGhana, Emmanuel Ajarfor Abugri and his colleague by operatives of Ghana’s National Security setup.

Abugri said they were tortured and beaten by the National Security operatives while in detention following a raid of their office and their subsequent arrest. Abugri and his colleague were arrested for “engaging in cyber-crimes” and released on Saturday 29 June 2019.

I was slapped severally,” he told a Ghanaian radio morning show host Francis Abban on July 2. “I was abused and tortured by the National Security Operatives. My friend, I cried like a baby.”

The National Security, however, denied physically abusing the duo, describing the claims “clear and deliberate” attempt by the suspect to discredit the investigations and the case against him.

Ghana’s President had come under severe public criticism over the increasing reports of attacks on journalists in the West Africa Country under his watch, raising a question about his credential as the fighter of human rights.

“Today, all these abuses are happening under his watch and the man isn’t even speaking to the issues. That’s what is most shocking and amazing. It is bizarre that all these things are happening and the president will not find the time, he will not stop globetrotting and address these major security concerns,” Ghana’s former Deputy Interior Minister James Agalga cried out.

General Secretary of the opposition National Democratic Congress (NDC) John Asiedu Nketia said the party joined the demonstration partly because of the abuses on journalists.

“Democracy is about freedom of speech and we have a democracy where even the right to speak now is being sole-sourced. Somebody decides which radio station should operate and which shouldn’t operate. Somebody decides what media personnel should say and what will land them into trouble if they said so. So, we think that the state of our democracy is deteriorating and we must wake up,” he said.

Another demonstrator told GhOne TV that: “Look at the unprecedented situation the media is going through, journalists being killed and others having to run away and hide in certain countries. I have lived in this country for a while and I have not seen this before that a media man will go and hide somewhere. We are living in unprecedented times.”

Ghana’s former president John Mahama, who is seeking to recapture the presidency in 2020, declared support for the demonstration on Monday in a Facebook post, saying: “Our country is on the downward trend, with an unbearable increase in the cost of living; the citizenry doesn’t feel safe and yet Government continues to oppress and intimidate the people including journalists.”

“This state of affairs is a threat to our democracy especially as the moral society remain unconcerned and surprisingly silent on the developments in our country, Ghana.

“I welcome, endorse and I encourage all to step out tomorrow and join the #Kumy3npr3ko demonstration organized by the Coalition for Social Justice,” he said.

According to him, “There is a lot of pent-up anger among Ghanaians and it’s beginning to manifest even among the security services. This manifestation gives all the allied groups participating in it, the opportunity to vent. It is in our country’s interest that we speak out and demonstrate our disapproval of the Akufo-Addo style of leadership, which has visited unprecedented hardships on Ghanaians.”