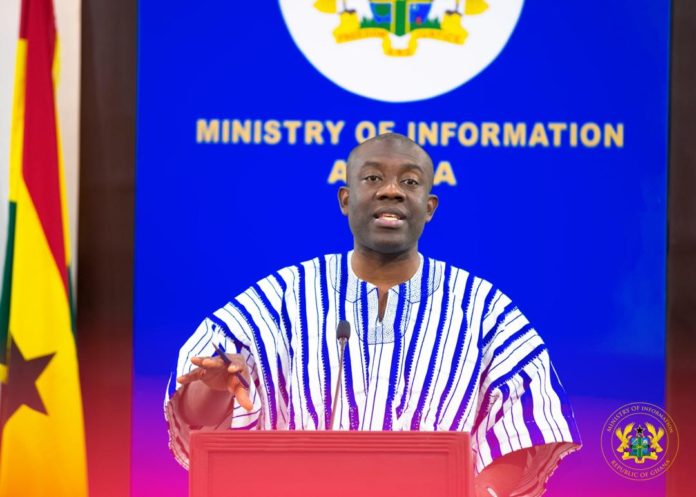 Government says the mid-year budget review which will be delivered by the Finance Minister on July 29th, will among other things focus on augmenting government revenues to fund the outstanding coordinated programs of social and economic policies.

The constitution requires every administration to prepare a coordinated program of social and economic policies with which it will govern. Annual budget programs are designed to fund and execute a part of that program each fiscal year.

Addressing Journalists in Accra on Sunday, the Minister for Information Kojo Oppong Nkrumah said though the Akufo-Addo administration believes it is steadily executing its commitments to Ghanaians, the mid-year budget review will afford it the opportunity to take a second look at revenue availability to execute the remaining programs, key among them infrastructure.

“This is why revenue mobilization which was highlighted in the 2019 budget will remain a key feature in the mid-year review. The objective will be to ensure that government mobilizes enough resources to fully deliver on the outstanding commitments” he said.

The Minister stated that “it is refreshing to see the vigour with which Ghanaians have responded to the President’s call to be citizens and not spectators, and consequently note calls for government to deliver on some national issues with dispatch. This same vigour will hopefully be translated into our revenue mobilization efforts to ensure that we fully fund and fully execute outstanding programs”.

Already Government has commenced efforts to cut some avoidable expenses key among which is the ongoing work on cutting out capacity charges for power that we don’t consume.

Mr. Nkrumah said government was hopeful that cutting out avoidable expenses while shoring up revenues will create more fiscal space to fully fund and execute the outstanding programs in the medium term expenditure framework.