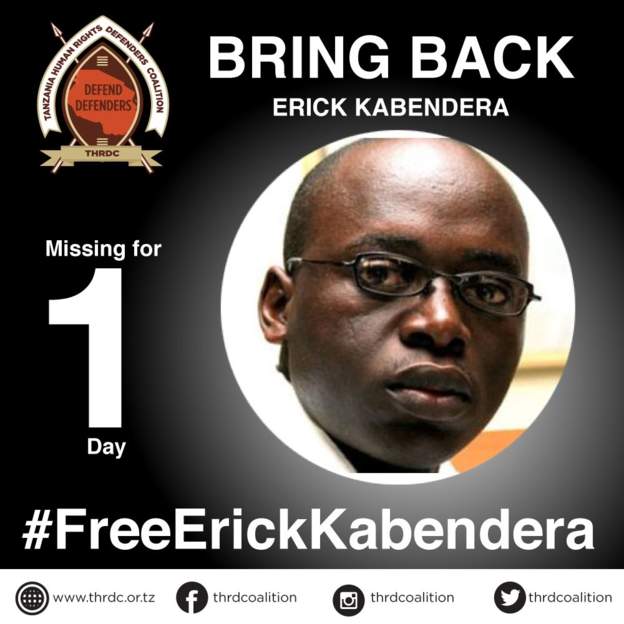 A top investigative journalist in Tanzania, who has been critical of the government, has been arrested for questioning, a police source has confirmed to the BBC.

Erick Kabendera was taken by six men from his home in Dar es Salaam on Monday afternoon.

At first reports suggested the freelance reporter had been abducted. Police are still refusing to comment officially on his detention.

The hashtag #FreeErickKabendera is trending on Twitter in Tanzania:

According to Tanzania’s private Citizen paper, the officers confiscated the journalist’s phone and that of his wife before he was taken away.

Witnesses told the paper that those who had gathered there and taken pictures had also had their mobile phones taken away.

Muthoki Mumo, from the Committee to Project Journalists (CPJ), said the manner of Mr Kabendera’s arrest was ominous and “further evidence that the press is not safe in President John Magufuli’s Tanzania”.

“Authorities must immediately disclose if they are holding Erick Kabendera, and for what reason, and ensure the journalist is returned safely to his family,” she said in a statement

Mr Kabendera is a well-respected journalist, his work, according to the CPJ, has appeared in The Citizen, the African Arguments website and the UK’s Guardian newspaper.

Since Mr Magafuli came to office in 2015, laws overseeing the media have been toughened and a number of newspapers and radio stations have been suspended for “incitement”.

He has often warned about fake news in the wake of articles critical of the government, saying there are limits to press freedom.