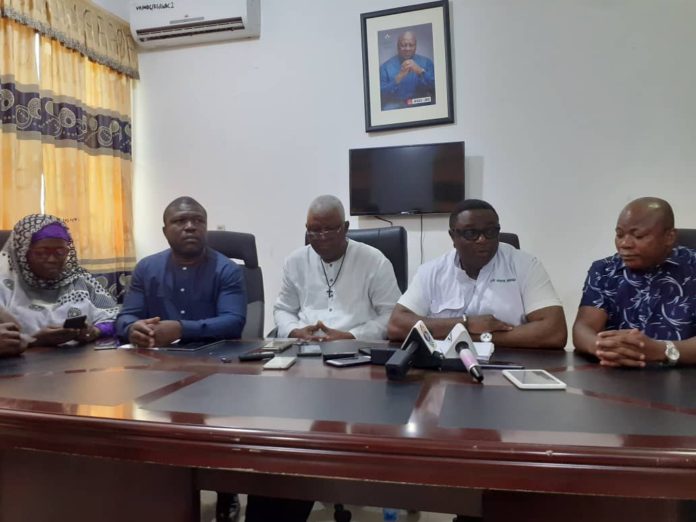 Residents in the Volta region are facing several difficulties in their quest to be captured into the Ghana card programme.

More than three weeks since the exercise began in the region numerous challenges including, network problems, frequent breakdown of machines, long queues, sleeping at registration centres overnight among others were observed.

Following these developments, executives of the opposition National Democratic Congress (NDC) in the region have accused the National Identification Authority (NIA) of discriminating against Voltarians.

At a press conference held in Ho to express their concerns, the NDC’s National Director of Elections, Elvis Afriyie Ankrah said they (party executives) had toured several registration centres across the region, mostly rural Volta and observed the agonies people pass through to get their cards.

In the presser, Ankrah mentioned that the NDC was not impressed with how the exercise has been organised, alleging, that some NIA officials exhibit lukewarm attitudes, disrespect to applicants despite their age and status and among other misconducts.

“Considering the educational background and ages of some of our elders in this region, we expected the registration officers selected for this process in our region to be trained on handling aged people with respect and dignity, however it rather appears the NIA officials who were deployed to our region have a PhD in disrespect, rudeness, arrogant and foul language,” he stressed.

According to him, the attitudes of the officials have discouraged many Voltarians from participating in the registration, saying: “You know most of our people do not own a passport or birth certificate which are the primary requirement for this process, the voters ID card which we believe most of our people of 18 years and above may possess is no longer part of the requirement for acquisition of the NIA cards.

“So the only way most of our people can establish their identity and nationality as Ghanaians is through a guarantor, now one of the requirements of being a guarantor is to be registered, so the more you delay people from getting their cards the more the issuance of the card is slowed down and the fewer guarantors you have in the system leading to a reduction in a number of people who are able to ultimately register.”

He added, “We believe a lot of Ghanaians may have serious difficulties in acquiring the Ghana card considering how the process has been conducted, and therefore we as a party will resist any attempt by the Electoral Commission to make this card a requirement for voter registration or for the voting itself.”

The party’s Regional Chairman Henry Ametefe said although the government has noted that the exercise is not politically motivated, the NDC in the Volta region have observed it is and cautioned the government.

“Even though, they felt this exercise does not require political colonization, the programme is purely handled by the NPP, the requirement process was done at the residency under the authority of the Regional Minister and they have been able to engage many of their NPP operatives to handle such a very unique national exercise which we felt demand answers from those in charge.”

Meanwhile, a press release issued by the NIA indicated that the exercise is to end on the 14th of August in Volta Region and expected to continue in the Oti region in the third week of August.