A teacher who was too strict for anybody to resist his instructions walked to his students in a classroom one morning. After he and the students had exchanged greetings, he reached for a piece of chalk from a box on his table.

He walked to the chalkboard and wrote on it a science topic he was scheduled to teach: the Importance of Observation.

To begin the lesson, he placed a table in front of the students and put a glass cup labelled ‘Urine’ on it. He asked them to carefully observe what he was going to do next and told them to prepare to do same in turn. The students composed themselves in their seats and watched anxiously.

The teacher dipped his finger into the liquid in the transparent cup and sucked it. In reaction, he screwed up his face and shrugged his shoulders to show his dislike for the taste.

The whole class did not only cringe with deep shock at what he did but also developed goosebumps as everybody would take the same task in turns soon. Beginning from the front row to the back seats, the students came to the table one after the other. They dipped their fingers in the cup as the teacher supervised them strictly, inserted the fingers into their mouths grudgingly, sucked reluctantly and went back to their seats, spitting out the salty taste in their mouths into any corner.

The teacher watched for a while as they tried to get rid of the unwanted bit from their mouths. Some, after spitting several times and still felt the undesirable taste, rubbed their tongues hard against the hems of their uniforms. Some went out of the classroom with water in cups and bottles; held some of the water in their mouths and, keeping their heads back and looking skyward, did an exhaustive gargle of mouthwash; then, disgorged the water with disgust.

When the class resumed, he asked them how the taste was. Generally, they said it was salty. He asked them again if they observed him carefully when he dipped his finger in the cup. In reply, they chorused, “Yes, Sir.”

“I’m not sure you did,” he told them. “Because if you did, you would realise that the finger I dipped in the cup was not the one I sucked.”

As the students held their heads in shock, he remarked, “You all failed a simple test.” And as they all turned around and looked at each other downheartedly, he allayed their worries: “Anyway, what you tasted was not urine. I only dissolved some salt in water and labelled it as urine. You could come to needless grief one day if you fail to observe the things around you. Just be more observant henceforth; otherwise, one day you will drink real urine.”

Are our Homes, Schools Observant Enough?

Just last week, a teacher friend called John and I visited a fire officer. Passing through the premises of the Sacred Heart International School, a basic school in Bolgatanga, on our way back, I spotted a drawing of a rhinoceros on a classroom wall labelled “hipopotamus”.

I drew John’s attention to it and went close to the wall. “Even the spelling is wrong,” he observed as he took pictures of the drawing. “The correct spelling is h-i-p-p-o-p-o-t-a-m-u-s. There are three Ps in hippopotamus,” he explained.

Although we all make spelling mistakes at times, misspellings are not pardonable especially at basic schools where the schoolchildren are still in their formative or foundational years. If the foundation is porous, the entire building definitely would be wobbly.

A number of questions came up as we proceeded from the school’s compound towards our journey’s end. The appearance of the artwork shows this error has been on the wall for a very long time. So, how come none among the school authorities, to whom the pupils are entrusted, and the lettered parents or guardians, who lead the children to the school every school day, noticed a big blunder screaming so loud on a classroom wall?

Does this lapse imply that the responsibility of the circuit supervisor in charge of that school is to check only the teachers, the pupils, the teaching and learning resources but cares less about the surroundings? Did somebody ever before now point out that mistake to the school’s authorities and yet no action was taken? Did the authorities at the school ever bother to inspect the work done by the visual artist on the classroom walls before or immediately after the artist left the premises?

Whilst this, in my opinion, does not mean the authorities at the school themselves cannot tell a rhino and a hippo apart, it simply could be that they have spotted the blunder but are underestimating the cost of their action by looking the other way each time they see it. A school is where learners are supposed to take as ‘the gospel truth’ whatever the authorities approve. That explains why children generally tend to agree with teachers but argue with parents or guardians on academic facts.

Children believe whatever is allowed to exist in their schools is what those who are officially in charge of their future have endorsed or certified for their good. They believe if it is not correct or good it would not be allowed to be there in the first place. So, if a visual artist says a rhino is a hippo on the wall of a classroom block and the school authorities have not seen or said anything wrong about it, for such children, it means a rhino should be called a hippo and any animal that calls itself a hippo aside from the rhino they have been formally shown is an impersonator.

Some of the children already may have acquired the misleading information as the truth. And it may have been a bone of contention between them and their parents or guardians who hold a contrary view— a needless dispute.

Of course, our eyes should not be only on what our children learn at school. Our attention also should be keen on the dangerous objects that might be found around them. Some children have gone too soon because they inserted a live mobile phone charger in their mouths. Some, like the stories I did earlier in the year about some 150 children receiving surgical attention at the Komfo Anokye Teaching Hospital after mistaking caustic soda solution for drinking water, are being exposed at home to some toxic substances which should not even be found on the market.

Some children, who are supposed to be at playgrounds with their friends, are condemned to hospital beds for swallowing a piece of bone or a coin which should have been taken away from a tabletop or from the floor to prevent any mishap. Some, too, have added to the OPD numbers because we have failed to obey overemphasised simple instructions from health experts to ensure certain medicines are not within the reach of children. We want to be more observant henceforth as parents, guardians and school authorities so that, as the teacher warned his class in my opening paragraphs, we and our children do not end up drinking “urine” one day.

It is in the interest of the Sacred Heart International School to right the wrong on the wall before schools reopen nationwide next month. Anybody who is close to the Minister for Education should say hello to him on my behalf.

Disclaimer: The views expressed in this write-up do not represent the views of EIB Network. 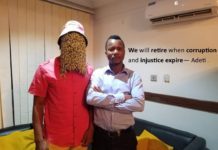 Edward Adeti writes: I will not die without a word 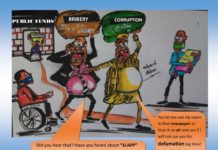 Adeti’s Notebook: To those being sued by corrupt people 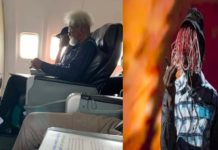 Edward Adeti writes: Soyinka, Anas, the Partridge and the Poacher