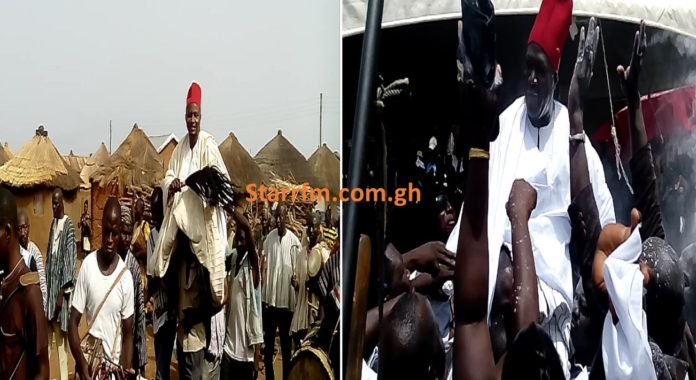 Just yesterday, two houses, each full of belongings that took years to gather, were set on fire in Bolgatanga just like a sweeper would gather some rubbish together, bend forward and strike a match to it.

I was at a shop with a friend when anxious relatives began to reach their loved ones on the telephone with strong warnings as usual to stay away from Atulbabisi because the two factions were firing guns again.

“They started firing last night,” complained an Atulbabisi resident who, at the news of the gunfire, had suddenly turned himself into an acting refugee inside the provisions shop. He carried on his face the same fatigue shown nowadays by many residents who have become so sick and tired of the episodic shootings at the heart of the regional capital.

On my way back home, I saw some non-residents of the troubled area, who had only come to trade in town, in a hasty departure homewards. And anticipating that the peacekeeping soldiers would, as usual, emerge from their nearby tents and base located some five minutes from town to whip everyone indiscriminately into their rooms before sunset, many residents of the community, who were having a nice time on the outskirts, returned home prematurely.

With time, writers will get tired of writing about what many have described as a meaningless fight that has nothing to offer the people except to disrupt good plans and inspire prospective investors to reconsider their thoughts. With time, readers will get bored of reading about any further developments on a traditional power struggle that is in its sixth year with no end in sight yet since 2013 because nothing irks the ear and sickens the eye faster than a protracted self-inflicted grief.

If you listened to the police and observed the posture of the military, you would know that even the peacekeepers have exhausted their patience and grown weary. The only thing that is not tired is the entrenched interest each of the combatant sides has. That is why the evasive guns are still loud.

As I was going back home with my head contemplatively hanging down inside a commercial tricycle, I was torn between reporting the latest episode and just saying nothing about it like a tired observer. I engaged three police commanders on the telephone whilst I was still on the road to find out why the gunfire had resumed. They had not established the reason as of that time. But I suspected the usual intemperate comments from any of the factions as the cause. By the time I was getting off the vehicle, I had chosen exactly what to do. Write an opinion piece.

A Live Wire on Fire

I have followed this nagging conflict from the time it was conceived. When Joseph Nyaaba Apakre was installed on Wednesday 6th May 2015, at Nalerigu as the Paramount Chief of Bolgatanga and renamed Naba Abeka Nonge-Buuri Maltinga, I was there.

I have monitored the proceedings, reported the outcomes of the legal battle waged by these two sides as the dispute progressed from the Upper East Regional House of Chiefs in 2015 to the Bolgatanga High Court One in 2016, and travelled a draining further distance to this day. And I have been to the clash scenes and the hospital wards to tell the stories of the dead and the injured.

Each time curfew or restriction of movement is imposed in the area in government’s response to a renewed clash; several operators of football-match watching centres in the area lose colossally. The grief is even more felt in the Champions League Season when the matches are played at the time soldiers incapable of humour are roaming with a koboko (a horsewhip) and a ‘diplomatic licence’ to put the ‘fear of God’ in any daredevil captured outdoors during the curfew hours.

A community that provides lodgings for violence will gradually have no room left for development to occupy. Somebody once said investment is a coward; it doesn’t go where there is violence. And it is true. It cost Bawku a lot of public funds to keep peacekeepers around and some well-established entrepreneurs fled the area with their money before peace finally returned to the municipality. The ‘Atulbabisi Albatross’ is eating deep into the tiny neck of state funds. Whilst the maintenance of the security forces on the ground is drawing so much funds from the state, the revenue the state should also generate to make up for the peacekeeping funds being spent is also being cut down as the curfew or the movement restriction being imposed is also cutting down the number of hours taxpayers usually do good business.

Three among the things that make the Bolgatanga chieftaincy conflict complex to some degree are the facts that the stakes are very high on both sides, the two factions live too close to each other and they are too closely related to be so bitter at each other.

As we speak, the case is being heard at an appeal court in Tamale and at the National House of Chiefs in Kumasi. The stakes are sky-high, and the two sides, having invested tediously in the bid for the position and tearfully lost some lives and property in the struggle over it all through the six years so far, obviously would refuse to let go just like that when the coveted title finally settles on one side.

The questions we should begin to ask ourselves are not just few. How long are we going to keep the khaki men among civilians and expect them to not be quick-tempered like a broody hen outside their natural habitat— the isolated barracks?

How sustainable would that kind of peace be if one side is forced to accept defeat through military force and the two factions, so close as they are in the same community, disagree to do things in common? Is the National Peace Council, together with other relevant stakeholders, preparing the minds of the opposing parties to accept the outcome of the case whichever way it goes? How ready is the state to keep the peacekeepers there further, for as long as necessary, at the taxpayer’s cost after one side is declared winner?

I am of an opinion some may reject. Power-sharing. The two enlightened gentlemen from the two sides are very strong about their royalty claims and each wants to be king. Is there anything bad in if the Bolgatanga Traditional Area is just divided in half and each of the disputed chieftains takes over one part with his own sub-chiefs and council of elders?

I believe if the kingdom, or the chiefdom, is shared, the clash being witnessed today will turn into cash tomorrow. The sharing would leave the two disputed chiefs in a competitive position where each would want to develop his area to justify his pursuit of the title. That way, there would be peace because every side would mind its own business, the law would deal more decisively with any warmonger in isolation because there is no longer a chieftaincy dispute for anybody to hide behind to perpetrate crime and there would be accelerated development because each side would want to impress the general public who have always questioned the motives of the two sides for fighting over power.

And this way, our children’s schoolwork will no longer be disrupted by any conflict bullets flying blind during the day and the games they play no longer cut short at home by a reminder of a curfew order before nightfall. Then, our market women will go out and return with joy like before when gunshots were only anticipated and heard at a traditional war dance. This is my humble thought. Perhaps, we should have a policy debate on this proposal.