The Ashanti Region command of the Ghana Immigration Service has bemoaned logistical and infrastructure challenges hampering its smooth operations.

The activities of the Immigration service is cardinal to the Ashanti region considering its brisk business activities; its central geographical location and institutions of higher learning which continues to draw in a huge population of foreigners.

The Ghana immigration service has one headquarters in the Ashanti region with fourteen municipal and district commands supporting its operations.

It also runs services from its site offices at the Kumasi airport and on the campus of the Kwame Nkrumah University of Science and Technology.

The command however, does not have an immigration headquarters befitting of its status with all its municipal and district offices barely perching in spaces offered by district assemblies.

The service is also worried municipal and district immigration offices in the Ashanti region have no cars and communication gadgets to complement their mobile operations.

These stark challenges were brought to the fore in Kumasi when the minister of interior Ambrose Derry led a high-powered delegation from his ministry to meet staff and officers of the Immigration Service in the region.

Disclosing the worrisome state of the GIS, the Ashanti region commander of Immigration Assistant commissioner of immigration Michael Kwadade divulged that the building serving as headquarters houses a hundred and sixty five staff in just six offices.

“The Ashanti regional immigration command needs a regional office building of its own since it already has land. None of the 14 Municipal and District commands has a vehicle although most of them have wide operational areas that are hotbeds of illegal activities and have to use private vehicles. The command also has some service owned properties that are in acute state of disrepair because they are potential death traps for officers,” he lamented.

The controller general of the GHANA IMMIGRATION SERVICE Kwame Asuah Takyi indicated that government has taken notice of the challenges facing the service.

He gave assurances that preliminary discussions had begun with concrete steps on the ground to provide the needed logistics to support the personnel to work at their optimum.

“We have taken a tour and wherever I went I have been emotionally traumatized but there is going to be a radical shift never seen in the history of the Ghana Immigration Service and I encourage you that despite the challenges, the president does not promise and fail. We have promised and we will deliver,” he reassured.

The interior Minister Ambrose Derry who visited the service with a high powered delegation commended the service for fishing out and repatriating over 200 illegal immigrants who were engaged in illegal mining and other illegal businesses in the Ashanti region.

He underscored the contribution of personnel at the borders who continue to fish out human traffickers and smugglers of fuel and subsidized fertilizer in the light of clear attempts to bribe their way through. 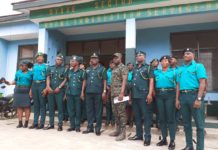 V/R: We are ready to combat terrorism – GIS