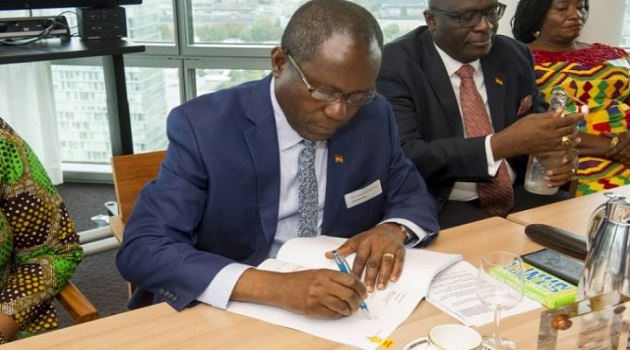 The Ghana COCOBOD on Friday, September 13, signed its annual cocoa loan syndication deal in Paris, France with some 20 banks including Societe General, Nedbank, MUFG, and NET-IXIS.

This comes after Parliament’s approval for COCOBOD to borrow up to $1.3 billion to aid cocoa purchases and pay farmers for the 2019/2020 crop season.

COCOBOD CEO Joseph Boahen Aidoo signed the deal with 20 banks in Paris on Friday which will effectively ensure that adequate funds are made available to the Licensed Buying Companies (LBCs) to pay cocoa farmers for produce bought during the crop season in question.

“Over the past years, we have consistently maintained that reputation of honouring repayment of year-after-year syndicated loan without a single default,” Mr. Boahen Aidoo said during the ceremony in the French capital.

The first tranche of the 1.3 billion loan deal is likely to hit the Bank of Ghana’s accounts in the first week in October and would be repaid over a period of seven months.

COCOBOD plans to use the funds to finance the purchases 800, 000 cocoa beans.

One of the immediate impacts the deal will have on the economy is that it will improve Bank of Ghana’s reverses, a situation that could give investors and currency traders some assurance about the central bank’s ability to defend the local currency.

The payment to the farmers and licensed buying companies will also improve liquidity in the banking system.