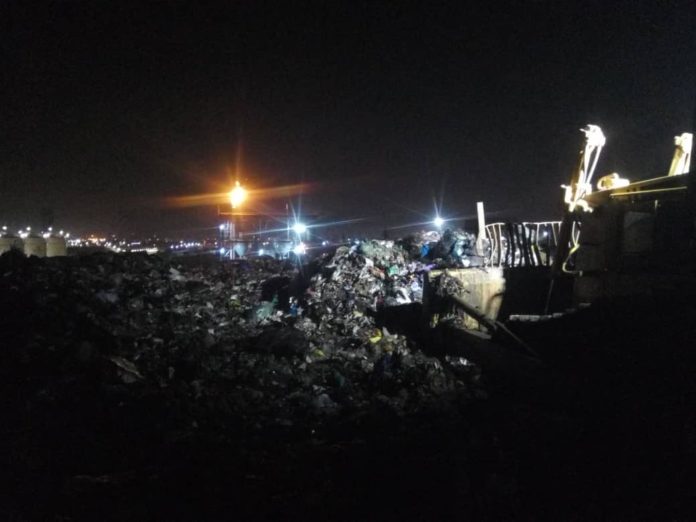 Residents at Kpone in the Kpone-Katamanso Municipal of the Tema Region have raised serious concerns about the way the Kpone Landfill poses serious threat to their lives at the moment.

Mr. Kofi Okrah a resident of the area in an interview complained of intermittent but overwhelming fire outbreaks on the landfill since the coming into operation of a Chinese ceramic company which uses fire to harden their products about a year now. He said the fire has brought about pungent smoke for several weeks making it difficult for residents to breath.

Mr. Okrah said many of the residents including him have contracted throat disease which has made it impossible for them to feel the taste of any food they eat lately and fear it may escalate.

According to them, the engineered landfill which begun operation in 2013 has not experienced the current kind of fire outbreaks and corroborated the claim that the fires could be the sparkles of fire from the ceramic factory which operates just by the landfill at night though unsubstantiated.

The landfill which was meant to receive 500 cubic tons of waste in a day eventually receives in excess of 1,500 and runs 24 hours in a day since all or most of the waste in Accra was now brought to this landfill site until the installation of IRECOP.

They alluded to the fact that since Zoomlion opened the Integrated Compost and Recycling Plant (IRECOP) near the Korle Bu Mortuary, the number of trucks trooping into the landfill reduced drastically especially that they find it difficult to dump at the already choked landfill at Kpone.

It is therefore deduced that landfilling is no longer appropriate compared to the IRECOP which is able to reduce the waste drastically by using all the organic waste for compost for the agrarian population and recycle the plastics for reuse etc.

Research has established that 61% of waste generated in Ghana is organic and 14% plastic which are all processed at IRECOP with paper and textiles which is 5% and 2% respectively bringing the total to 82%. IRECOP receives between 280 to 360 tons of municipal solid waste a day meaning a chunk of the waste generated in the cities could be taken care of if we have IRECOP situated at vantage places.

The IRECOP system which does not need so much land to operate and the waste is reduced to a tolerable minimum must be encouraged. By estimation, one can get only one track out of 20 trucks after the sorting and recycling is done at IRECOP. Question is why our leaders will not adopt the IRECOP plants since there is no land for these landfill purposes today.

Looking around, the area has fast advanced in terms of development and the managers believe with this kind of development coupled with the size and height of the heap the landfill has no place here.

Research again has revealed that the longest serving landfill site in Ghana has been Mallam Dumpsite (1991-2001), the rest have survived barely for less than five years meaning landfilling is not sustainable compared with IRECOP.