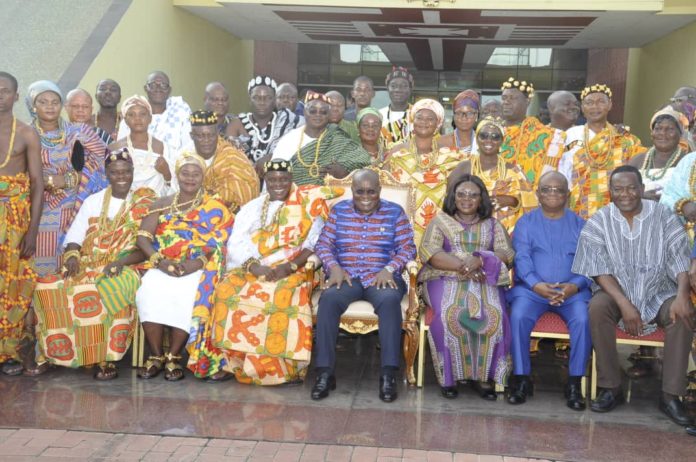 The Chiefs and Queen Mothers of the Dzodze Traditional Area have commended government for the positive social policies and interventions as well as its achievements in the past two and half years since assuming office indicating that the people of Dzodze are “thankful for the incredible achievements.”

Addressing the President at the Jubilee House when they paid a courtesy call on him, the leader of the delegation of Chiefs and Queen Mothers of Dzodze Traditional Area, Togbui Dey III, said the people of Dzodze whom they represent had sent them to convey their deepest appreciation for the several interventions that have directly benefited them.

“Our mission here this afternoon is to commend you and also thank you for the incredible achievements of your government in the past two and a half years. Your audacious and life changing policies and programmes have inspired hope in us and we are very excited about the future of this country and the future of our children,” Togbui Dey III said.

The traditional leader further indicated that the people of Dzodze are seeing transformation in their lives and it was obvious to them that there would be many more positive developments ahead for their community under the current administration.

“Once upon a time, an NPP government was voted into power and we had a rare privilege of having Ketu North District Assembly created for us with Dzodze as its capital. Today, by divine arrangement, an NPP government is back in power again and guess what…, Your Excellency has elevated our district to a municipal status. Thanks!” Togbui Dey stated.

In a show of personal support to President Akufo Addo and the government he leads, Togbui Dey in quoting the proverb, “The bush where a child got a snail, that is where his eyes are drawn,” indicated that, “Now we know the bush where we can find the snails and we will keep our eyes there,” Togbui Dey stated.

Requests by the Traditional Leaders

In their address, the traditional leaders requested government to give consideration to developing a quarry in Dzodze through a Private-Public Partnership (PPP) to take advantage of the the huge granite deposits in the area to create jobs for the benefit of the people of Dzodze. Amongst others, they also asked government to construct a modern market in Dzodze, reconstruct the Aflao to Ho main road, give a facelift to the infrastructure of the Weta Senior High School and provide start-up funds for the women and youth of the Dzodze Traditional Area to help them expand their businesses.

President Akufo Addo in his response registered his appreciation to the traditional leaders and the people of Dzodze for their strong words of commendation as far as his government’s policies were concerned. He further stated that the various requests that had been tabled before him would be given all the urgent attention that they require.

“The various matters that you have put before us are matters that I have taken strong notice of and we are going to do our best to address every one of them. The matters you have brought are serious, they are appropriate and the government will take them on board accordingly and make sure that at the end of the day you get the relief,” President Akufo Addo said.