Two pregnant women have been delivered safely at a roadside in two separate incidents in Adawso in the Eastern region and Dambai in the Oti Region.

The first incident occurred over the weekend at Adawso in the Afram Plains South District of the Eastern Region.

According to a Community Health worker Emmanuel Addipa-Adipoe, the Pregnant woman left Atibie Hospital for home due to financial challenges but labour set in while at the shore of the Afram River waiting to cross with the Ferry.

“The news is with the help of the midwife in the picture we have just helped deliver a baby born to a diabetic mother who absconded from Atibie government hospital on account of financial constraints.  As you can see, the baby is big, so I am monitoring closely to prevent neonatal hypoglycaemia. I have set up the only fluid I have available, Dextrose, and I will cause mother to start breastfeeding,” the nurse explained.

Similarly on Monday September 30,2019,  two Public Health nurses,  Rita Wurapa and Rose Ayivor while on their routine monitoring with the District Director of Health Services at Dambai in Oti Region came across a pregnant woman in labour in the middle of the road .

The Pregnant woman was being rushed to the Dambai Health Center on a motorbike by her husband due to the poor road network at the village but there was a spontaneous labour on their way.

The team stopped and helped deliver the pregnant woman safely and rushed her to the Dambai Health Center. 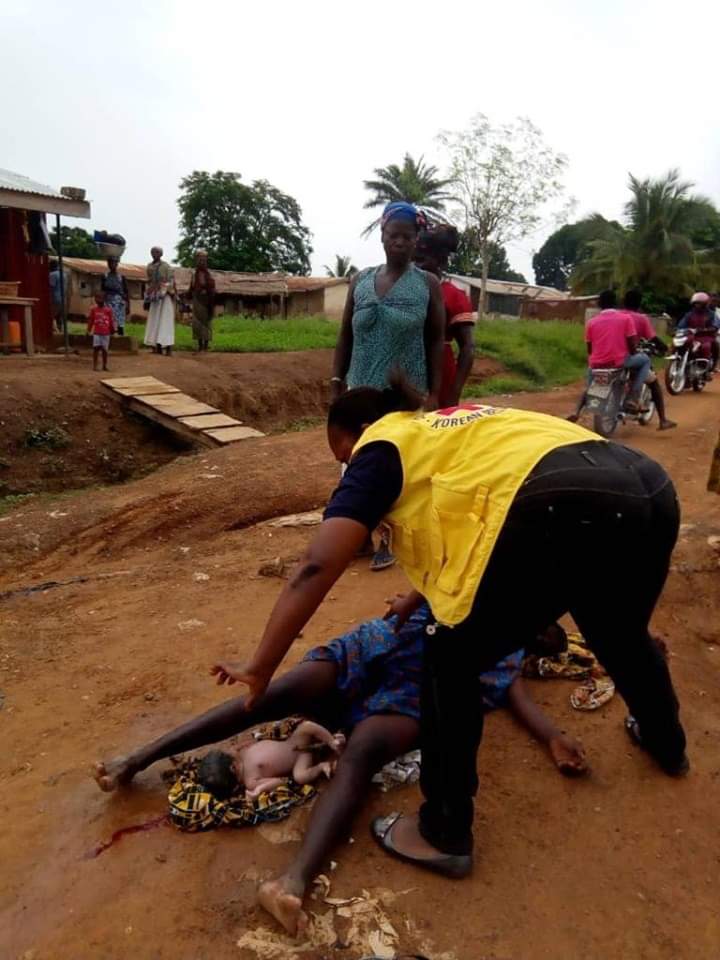 Rose Ayivor told Starr News “myself and the Director and the Public health Nurse, we got down from the car, we asked of a cloth to wrap the baby, we asked of a polythene bag to put on our hand and thread just to tied the cord but we were not having a blade or anything like that so we quickly called the midwife at the health center so the midwife came with the necessary instruments for the cord clamp”.

The high Maternal Mortality rate for instance in the Eastern Region remains a bane Ghana Health Service is grappling to significantly minimize .

A total of 132 Pregnant Women died in the region in 2018 according to the Ghana Health Service.

Although, the figure is a reduction from 180 maternal deaths recorded during the previous year, it is still on the high side and unacceptable.

The clinical causes of maternal deaths in the region have been attributed to Hemorrhage,eclampsia/Hypertension disease in Pregnancy ,Amniotic fluid, unsafe abortion. A clinical audit in previous years also faulted human errors on the part of Midwives and Doctors for some of the deaths which were preventable if due diligence were done .

In a recent presentation by Miss Elen Darkoa Asare -Deputy Director of Nursing Services at the Public Health Department of the Regional Health Directorate outlined that “poor referral system, inadequate specialists in hospital, lack/Poor supervision by some managers,poor emergency preparedness and responsiveness, frequent shortage of blood in the blood bank,and lack of capacity and logistics to swiftly identify high risk cases in rural areas” as some of the challenges debilitating against zeal to reduce the high maternal rate to the barest minimum .

Speaking to a pregnant woman in Akotoklo -Gua -farming community in the Upper Manya Krobo District of the Eastern Region she cataloged deeper glimpse into the complex trajectory of how the lack of basic social amenities such as roads, Water and none proximity of health facilities has on maternal health.

“we don’t have good water to drink, our road is terrible no car come here, pregnant women had to endure to sit on motorbikes to hospital.During emergencies at Night, we carry the pregnant woman on local stretcher . When you develop serious complications you will die,it has happened to some pregnant women here others too gave birth on the road .At first some don’t go to hospital but now there is no traditional birth attendant here so we endure” Rita Olesu, pregnant woman lamented.

The Eastern Regional Organizer of NGOs in Health, Edmund Duodu also the Executive Director of DMAC Foundation – a marternal and Child Health NGO, said government needs to increase investment in maternal health care . According to him, the infrastructural and logistics as well as human resources deficit in the rural areas are serious impediment which must be fixed to help in addressing the high number of avoidable deaths of Pregnant women.