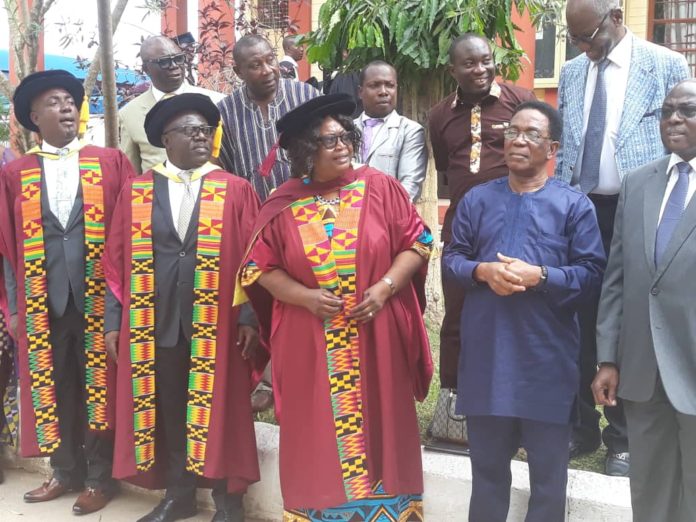 Government is appealing to striking Technical Universities Teachers Association of Ghana (TUTAG) to quickly return to their lecture halls in order not to disrupt the academic calendar.

The Association has been on a sit-down strike since Tuesday, October 7, 2019, over poor condition of service following the conversion of Polytechnics to Technical Universities.

But speaking at the investiture of the first substantive Vice Chancellor, Pro Vice Chancellor, Registrar and Director of Finance for the Takoradi Technical University, Minister of State in charge of Tertiary Education at the Education Ministry, Prof. Kwesi Yankah appealed to the striking lecturers to return to the classrooms following proposals to improve their salaries and allowances

“I am aware of the proposals put forth by government, they are fair and attractive and that this will be put before the general membership of TUTAG on their respective university campuses by their executives, I urge TUTAG to demonstrate tremendous goodwill to government and the people of Ghana by responding positively by our call to return to classes, In fact you have a good case but make sure you do not over plug a good case which can turn around to lose public support,” he urged the striking lectures.

He further appealed that in the interest of the student body and for the sake of academic stability, TUTAG should resume classes and avoid derailing the academic calendar which could throw out or balance the very foundation they seek to build for technical education and Ghana’s industrial future.

The National President for TUTAG, Dr Solom Keelson on his part, in an exclusive interview with Empire News’ Emmanuel Ohene- Gyan also revealed that the lecturers will only return to the classroom only if the Education Minister, Dr Mattew Opoku Prepeh and Finance Minister Ken Ofori Atta accent to the proposal while admitting that there have been some over chairs made to the association which is likely to take effect in November.
“Those of us who met, they could not tell that November they can pay because they don’t hold the national purse, so they man holding the national purse should say we can pay and they are going to seek that and come back”, he stated.

Meanwhile, the newly inducted Vice Chancellor Rev Prof Frank Eshun during his address to the audience has promise to expand the partnerships of the school with other higher educational institutions, businesses, health sciences, education, governmental agencies, civic organizations in order to build a better and much stronger institution. Our short-term goals are to embark on research that meet the demands of the region’s industries and businesses including agri-business, education, technology, the arts and sciences.