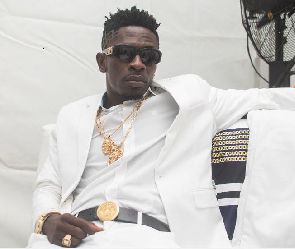 Popular Ghanaian dancehall artiste, Shatta Wale, has expressed happiness over how some of his colleague artistes have started living the life he preached some years ago.

According to Shatta Wale, several years ago when he was having most of his shows on the street, his other colleagues were just focused on filling the conference centres and the National theatre.

Speaking to host of ‘Starr Drive’ KOD on Starr FM Monday, the Ayoo hitmaker said “I am really happy most of them are learning from where I started schooling from (Street), I am one of the boys who started street shows in Ghana; I did community shows, from Nima, Jamestown during that time, most of them were concentrating on filling the conference centres.

Shatta Wale’s comment comes days after Sarkodie organised a free concert for his fans at Tema dubbed ‘This is Tema’ which was held at the Chemu Park at Tema Community 7.

The event had several artists who came to support the rapper except for Shatta Wale.

But Shatta Wale, who was the only Ghanaian artiste on Beyonce’s Lion King album said he was not invited to the event.

Anytime a promoter asks me about some of the biggest artistes in GH, I always mention his name. For me, I’m cool with him.”

Shatta recently released his album dubbed the ‘ Wonderboy’ which is available on all online music shops.