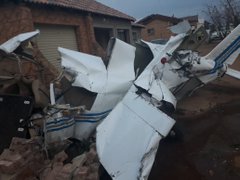 A 30-year-old pilot has been killed and a passenger injured after a light aircraft crashed into the garage wall of a house in a residential area in South Africa’s North West province, police say.

The passenger was admitted to hospital following the crash in Huhudi, a neighbourhood near the agricultural town of Vryburg, which is about 400km (248 miles) from the main city Johannesburg.

The South African Police Service (SAPS) said it was investigating a case of manslaughter, or culpable homicide.

The cause of the accident is still unclear.