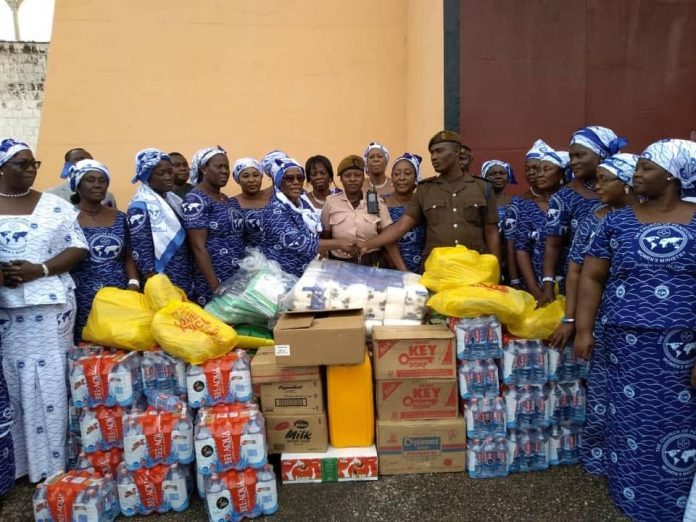 The Women’s Ministry of the Church of Pentecost Teshie-Nungua Area has presented assorted items to the male section of the Nsawam Medium Security Prisons.

Presenting the Items to the inmates, the Area Women’s Ministry Leader for Teshie-Nungua, Mrs. Cynthia Araba Siaw Agyepong said the Ministry was interested in the welfare of the inmates because they are all precious children of God. He said Jesus expects all Christians to visit those in Prison, hence the periodic visit to the prisons.

Receiving the items on behalf of the inmates, ACO Philip Bekoe expressed gratitude to the Ministry for their support.

The Ministry also fellowshipped with the Church of Pentecost, Inmates Assembly which has over 1,000 membership in the Prison. The Wife of the Area Head for Teshie-Nungua, Mrs. Rachel Koduah encouraged the inmates and prayed for them.

“I want you all to know that God loves you and when you have Christ in your heart, there is hope, a glorious hope for you on earth and in heaven,” she said.

On her part Dcns. Mrs. Cynthia Araba Siaw Agyepong urged the inmates to embrace Christ and have a great life even in prison. “If you have Christ there is no difference between you and those of us outside, there is hope for you,” she said.

Preaching the sermon, the Resident Pastor for PIWC Nsawam, Pastor Emmanuel Osei Akosah who takes care of the inmates Assembly said humanity should not be distressed when they encounter difficulties in their lives. “When you fall into trouble, it should draw you closer to God and not far from Him,” he said.

He quoted several Biblical texts including Psalm 3:1-3, 2nd Samuel 12:11 and said it is only God who had the power ti change the fortunes of men, including being their source of protection and the lifter of their heads. He cited the case of David when he arranged for Uriah to be killed so he could marry his wife, When David’s son Absalom rose up against him, when Ahitophel abandoned him and Shimmei rained insults on him and pelted him with stones.

“If people think that because you are in prison, your life has come to an end, we have God Almighty who saves,” he said adding, “If you will stand for God, He will be your shield and will cover you with glory.”

Supporting Pastor Akosah, the Minister in charge of Home and Urban Missions of the Church of Pentecost, Pastor Agyei Kwafo urged the inmates to be strong in their faith, adding, “Jesus will free you from all your worries.

The Executive Chairman of the Jospong Group of Companies, Elder Dr. Joseph Siaw Agyepong supported the inmates Assembly with GHC 5,000.

The Inmates Assembly of the church requested for support for choir uniforms and other food items to support new convert classes.

After the church service, the Ministry was invited to the Prison School consisting of Primary, Junior High School and Senior High School. Tutors of the School including the former Member of Parliament and Coordinator for the erstwhile National Youth Employment Programme, Mr. Abugah Pele also called for support in the provision of learning and teaching aid for the School in the prison.

According to them, the lives of many young people have been transformed as a result of the school with some former inmates now pursuing university education after serving their term. 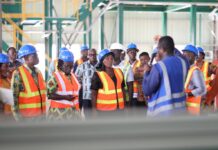 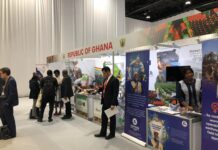