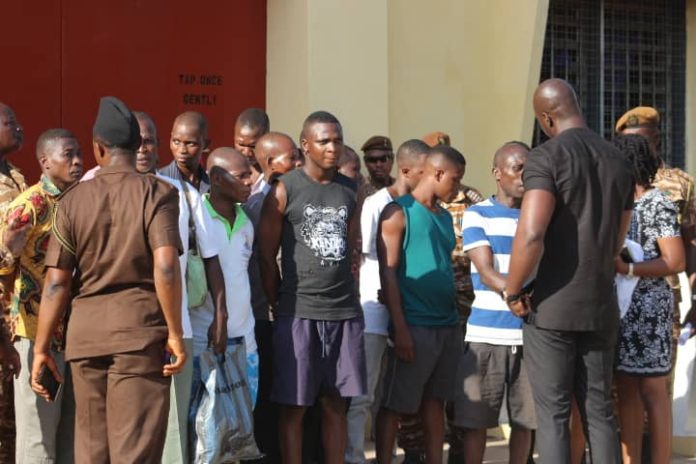 Some eighteen (18) remand prisoners in the Ho Central Prisons have been set free by the Justice For All (JFA) programme at its sitting today the 29th of November 2019.

The eighteen remand prisoners were in prison on remand for various offences mostly murder and possession of narcotics. The special sitting of the JFA was attended by the soon to retire Chief Justice of the Republic, Justice Sophia Akuffo, in the company of twenty-one (21) female Ambassadors who are serving in Ghana.

In all, a total of 27 remand prisoners had their cases heard by the Justice For All Court that sat at the Ho Central Prisons. Two (2) were discharged unconditionally, fourteen (14) were granted bail. A total of eight (8) applications were refused and one (1) application was struck out by the Court. Two applicants were convicted on their own plea and bonded to be of good behaviour.

Chief Justice Sophia Akuffo, in her address to the Ambassadors who accompanied her to the JFA sitting indicated that beginning from January 2020, the Justice For All programme will be decentralized to allow all the sixteen regions in Ghana to take charge of the Programme under the supervision of Justice Clemence Honyenuga, the Justice of the Court of Appeal responsible for the programme.

The Danish Ambassador to Ghana

The Danish Ambassador to Ghana, Tove Degnbol, who championed the initiative to get female Ambassadors serving in Ghana to visit the Prisons in a brief remark indicated that the Justice For All programme is just one step to actually solving the challenges of the country’s prison system. The introduction of the Alternative Sentencing Bill which is yet to be passed into law, the Ambassador said will hopefully help address the conjection problems in Ghanaian prisons more holistically. 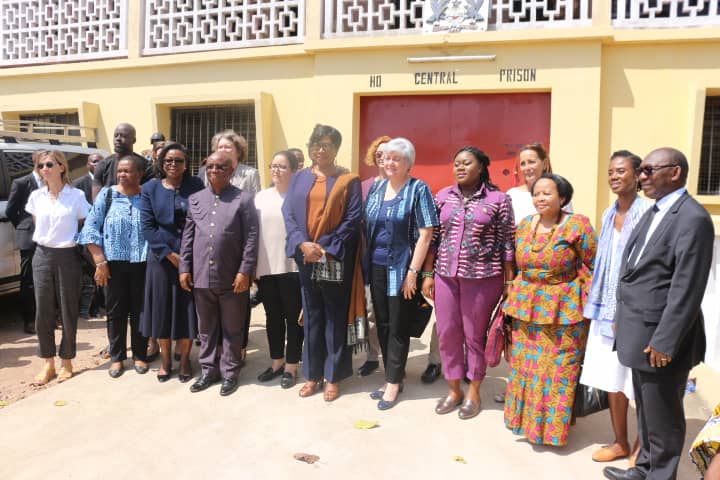 The Ho Central prison as at today the 29th of November 2019 had a total of 374 convicted male prisoners and seven (7) female convicts. Ten. (10) inmates are Lodgers, while twenty four (24) are trial prisoners. A total of ninty (90) male inmates are on remand as against two (2) females also on remand. In all the Ho Central prison which was originally built for one hundred and sixty (160) inmates currently has a total of 499 male inmates and nine (9) female, bring the total figure to 508.

The Justice For All Pragramme is an initiative of the Judicial Service of Ghana aimed at alleviating prison overcrowding through setting up special courts to adjudicate remand prisoner cases in prisons throughout the country. POS Foundation, a non-profit organization, plays a pivotal role in ensuring that the cases of remand prisoners are properly aggregated for hearing by the Justice For All Court.