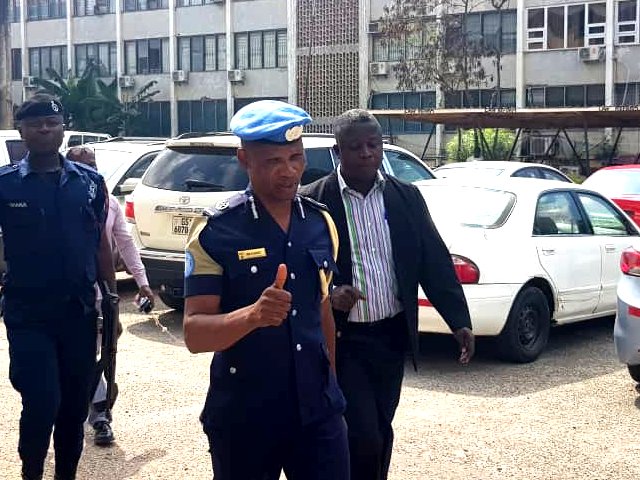 The embattled former Director of Operations at the Ghana Police Service ACP Dr Benjamin Agordzo has expressed fear over his detention at the Bureau of National Investigations (BNI) because he was kept in the midst of “total strangers.”

ACP Agordzo who has been charged with Abetment to Commit Crime; namely, Treason Felony contrary to section 20(1) and 182 (b) of the Criminal and Other Offences Act 1960 (Act 29) when he appeared before the Kaneshie District Court on Friday, November 8 said he was “scared” with the development.

His lawyer Martin Kpebu while making a case for him to be remanded in police custody instead of the BNI cells said his client was “now being kept with total strangers and that has cared him.”

According to counsel, ACP Agordzo was initially on his own at the BNI cells but all of sudden found “strangers” attached to him, a concern he said who ones a director of operations deserves better.

He added that his client has at all material times served well and diligently and therefore prayed for him to be detained at the police cells. Even though counsel specifically called for him to either be remanded at the Cantonment or Nima Police cells, prosecution led by ASP Sylvester Asare opposed.

objecting to the call by defence counsel for the suspect to be detained their preferred police cells, ASP Asare said selection of where the suspect be placed considering his rights, liberty, his security and the interest oif the public is uncalled for.

According to him, the prosecution didn’t see it prudent for a selection to be made in open court considering his security and therefore objects to that. ASP Asare said it is fatal to the security of the suspect as well as the public as a whole considering the gravity and nature of the case.

He, therefore, invited the court to remand the suspect to the police custody without the qualification of the cell. He told the court that, ACP Agordzo is a senior police officer and full assess would be accorded him wherever he is. he also assured that his counsel and families will just have to liaise with the police to know where he is being kept.

The court magistrate Mrs Eleanor Botwe subsequently remanded the suspect to Ministries Police Station to reappear on November 20. The court said at no point should he be transferred to another location without the consent of the court.