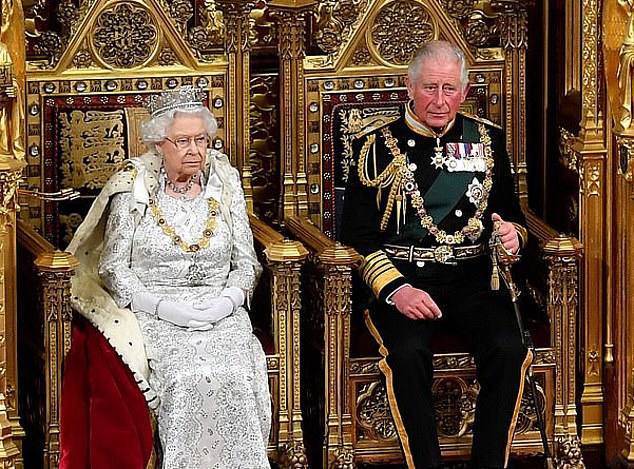 Prince Charles met Prince Philip at Sandringham yesterday to discuss the continuing fallout from his brother’s disastrous TV interview amid reports he is preparing to take over leadership of the Royals when the Queen turns 95.

The Prince of Wales’ key role in ‘retiring’ Prince Andrew from public life has fed speculation he is preparing to adopt a modern ‘Prince Regent’ role, which would see him control day-to-day royal affairs while his mother remains monarch.

Her Majesty will turn 95 in 18 months – the same age at which her husband Philip withdrew from his public duties – and there is the talk among courtiers that she may use the milestone to effectively hand over day-to-day control of the monarchy to Charles.

A royal source told The Sun: ‘The scandal surrounding Andrew and Epstein gave Charles an opportunity to step in to show that he can run The Firm. No one is bigger than the institution of the Royal Family. Not even Andrew, the Queen’s favourite son.

‘Charles recognised that and acted decisively — like the king he may well soon be. This was the moment when Charles stepped up as Prince Regent, the Shadow King.’

The Queen has been gradually reducing the number of public engagements she attends from 332 in 2016 to a still impressive 283 in 2018. Charles, meanwhile, undertook 507.

Yesterday, Charles headed straight to the Queen’s Norfolk estate after landing in the UK from an official tour of New Zealand and the Solomon Islands to visit Prince Philip.

Philip, 98, spends most of his time at Wood Farm, a small residence on the estate, and it is understood that the heir to the throne will spend several days with the increasingly frail prince.

Many courtiers feel that since the Queen’s husband, who used to rule his family with an iron fist, retired from public life, ‘discipline’ within the royal family has not been what it should be – hence Andrew’s virtually autonomous decision to go ahead with his disastrous Newsnight interview over his controversial friendship with paedophile Jeffrey Epstein.

It’s is believed that Charles will seek his father’s counsel over what the family should do next as well as spend a few days together, enjoying each other’s company.

Charles, 71, was in New Zealand with his wife, the Duchess of Cornwall, on a hugely successful tour on behalf of the British Government when news broke about the interview.

But he moved decisively with the Queen to demand that Andrew step down from public duties to deal with the scandal.

Meanwhile, sources have told the Mail that Charles will not be having any kind of immediate ‘showdown’ with his brother, as has been claimed.

Indeed, it is understood that he has no plans to meet with his brother, although it is inevitable that the issue will be discussed over the coming weeks.

It is thought that Charles, who discussed the crisis with his mother over the phone last week, feels that decisive enough action was taken over the scandal and there is no need to add to his brother’s difficulties by summoning him.

But he will be kept abreast of developments by staff and will inevitably sit down with Andrew at some point in the future.

Charles is long known to have wanted to see a slimmed-down monarchy in the future, and one that doesn’t necessarily include his younger brother or his daughters, Princess Beatrice and Princess Eugenie.

Andrew’s humiliation was compounded after Buckingham Palace revealed that every senior member of the royal family who was available to work would be joining the Queen to welcome NATO leaders, including Donald Trump, at a high profile summit on Tuesday.

The Queen, The Prince of Wales and The Duchess of Cornwall will formally receive the leaders and their partners, before being joined by the Duchess of Cambridge, The Earl of Wessex, The Princess Royal, The Duke and Duchess of Gloucester and Princess Alexandra in the State Rooms of Buckingham Palace.

Andrew, 59, who played a leading role in President Trump’s state visit to the UK earlier this year, would have joined them had he not stepped back from public life.

The only other absentees are the Duke of Cambridge and Countess of Wessex, who have other official engagements on the night, and the Duke and Duchess of Sussex who have taken a leave of absence from royal duties.

Earlier this week it was revealed that Princess Beatrice and her mother Sarah Ferguson both tried to talk Andrew out of giving the BBC interview.

They both cautioned him against doing the programme, while his then private secretary Amanda Thirsk was more gung-ho, thinking it could offer him a chance to draw a line under his association with Jeffrey Epstein.

‘Princess Beatrice and Sarah both advised Andrew against going ahead with the interview,’ a friend claims. ‘However, he paid too much attention to Amanda, who was encouraging him, saying it would clear his name.’

This contradicts weekend reports that Sarah Ferguson and Beatrice were among the key figures pressing him to participate.

It was claimed that the Duchess of York had been keen to end the speculation about Andrew’s involvement with a convicted paedophile and sex trafficker ahead of Beatrice’s wedding to property developer Edoardo Mapelli Mozzi next year.

However, Fergie did not attend the meeting with the Newsnight team and was abroad when details of the interview were being finalised.

Andrew, Beatrice and Thirsk met Newsnight presenter Emily Maitlis and the programme’s deputy editor, Stewart Maclean, at Buckingham Palace three days before filming to discuss the scope of the interview.

A close friend of Beatrice insists she ‘wasn’t part of the decision-making process’.

The pal adds: ‘Bea went to one meeting with the BBC. That’s all.’

Princess Beatrice, who hosted a party for her fiance’s 36th birthday at Mayfair nightclub Annabel’s last Tuesday, was said to be upset about the aftermath of the interview, which has seen Andrew forced to stand back from his charity patronages.

Thirsk, who has worked for the Prince since 2012, stepped down from her role as private secretary last week.

She is reported to have clashed with Andrew’s former PR adviser Jason Stein, 28, who strongly advised Andrew against going ahead with Newsnight and left after just a month in his job.

Thirsk is being employed privately by the Prince and is going to be chief executive of his business mentoring undertaking, Pitch@Palace.

This is while it was also revealed that Charles is believed to have called his mother the Queen and urged her to sack Andrew from all royal duties and roles immediately fearing his presence could fatally damage the British monarchy.

And MailOnline revealed last week that the heir to the throne is expected to meet the duke within days and ‘read him the riot act’ – and explain why he retired him off at the age of 59.

Prince Charles and Prince William are also said to be clear that they would oppose any future return to royal duties, it emerged.

It came as it was revealed that Andrew is to ‘stand back’ from his 100-plus charity patronages in a sign of his deepening humiliation over the Jeffrey Epstein scandal.

A showdown between the brothers over Andrew’s disastrous decision to speak publicly about his relationship with convicted paedophile Epstein is inevitable, experts have said.

A new poll found six out of ten people believed it had damaged the reputation of the Royal Family and a slim majority believed he should be banned from public events such as Trooping the Colour and Remembrance Sunday.

Plans for a glittering reception at Buckingham Palace to mark Prince Andrew’s 60th birthday in February have been mothballed following public revulsion over the Newsnight interview.

Representatives from his charities, business sponsors and military affiliations would have been invited to the party, but many have attempted to distance themselves from him since the programme was shown.

During the BBC interview, Andrew denied claims he had sex with a 17-year-old girl, Virginia Roberts, but admitted he had ‘let the side down’ when he visited Epstein’s home in New York – two years after the billionaire financier’s conviction for soliciting a minor for prostitution.

The decision to go ahead with the interview was initially said to have been sanctioned by the Queen, but a royal source told the Sunday Times she had not given her approval and Andrew had not told her anything about what he planned to say.

The Queen was said to be ‘deeply frustrated’ that the scandal had overshadowed the rest of the Royal Family’s work although she remained ‘privately supportive’ of her second son, according to the source.

She effectively sacked him from royal duties last week after her heir Prince Charles and second in line to the throne, Prince William, asked her to intervene.

A source told the Sunday Times William had spoken to the Queen and Charles about Andrew’s future and believed his removal from public life was ‘the right thing to do’.

They said: ‘William is becoming more and more involved in decisions about the institution [the monarchy] and he’s not a huge fan of his uncle Andrew.’

Andrew agreed to withdraw from public duty but initially wanted to remain a figurehead for some 200 charities and other affiliations. But he was forced to back down after many made it clear they no longer wanted his backing.

At least 23 organisations have either dropped him or accepted his resignation, including the English National Ballet, the Royal Philharmonic Orchestra and the Outward Bound Trust.

Several sponsors have also dropped their backing for his Pitch@Palace business initiative and the project has been told to find offices outside of Buckingham Palace.

There were calls for the duke’s business dealings and private finances to be scrutinised by the public finance committee, Parliament’s financial watchdog.

‘We recognise there will be a period of time while this transition takes place.’